For Christopher Eubanks, this moment was three years in the making. On Sunday, the American earned his second ATP Challenger Tour title and first since 2018, prevailing on the hard courts of Orlando.

It was a long-awaited return to the winners’ circle for the 25-year-old, who turned in an impressive week at the USTA National Campus. Straight-set wins over former World No. 38 Nicolas Jarry and reigning NCAA champion Sam Riffice were followed by a 2-6, 7-6(3), 6-4 comeback victory over Colombia’s Nicolas Mejia in the final.

Eubanks weathered the storm, literally, in claiming his second Challenger title. The championship clash was suspended twice due to torrential rain in central Florida, before concluding indoors. In the end, he would deny Mejia his maiden title with a determined performance.

After enduring such a long title drought, Eubanks admits that these are the victories that validate all the hard work and hours off the court. The former Georgia Tech University standout is returning to his roots, getting back to basics on the court after struggling to find his top form in recent years. The Atlanta native, who reached a career-high No. 147 in April 2019, is on the rise once again. He is knocking on the door of the Top 200 of the FedEx ATP Rankings, rising 36 spots to No. 205 on Monday. 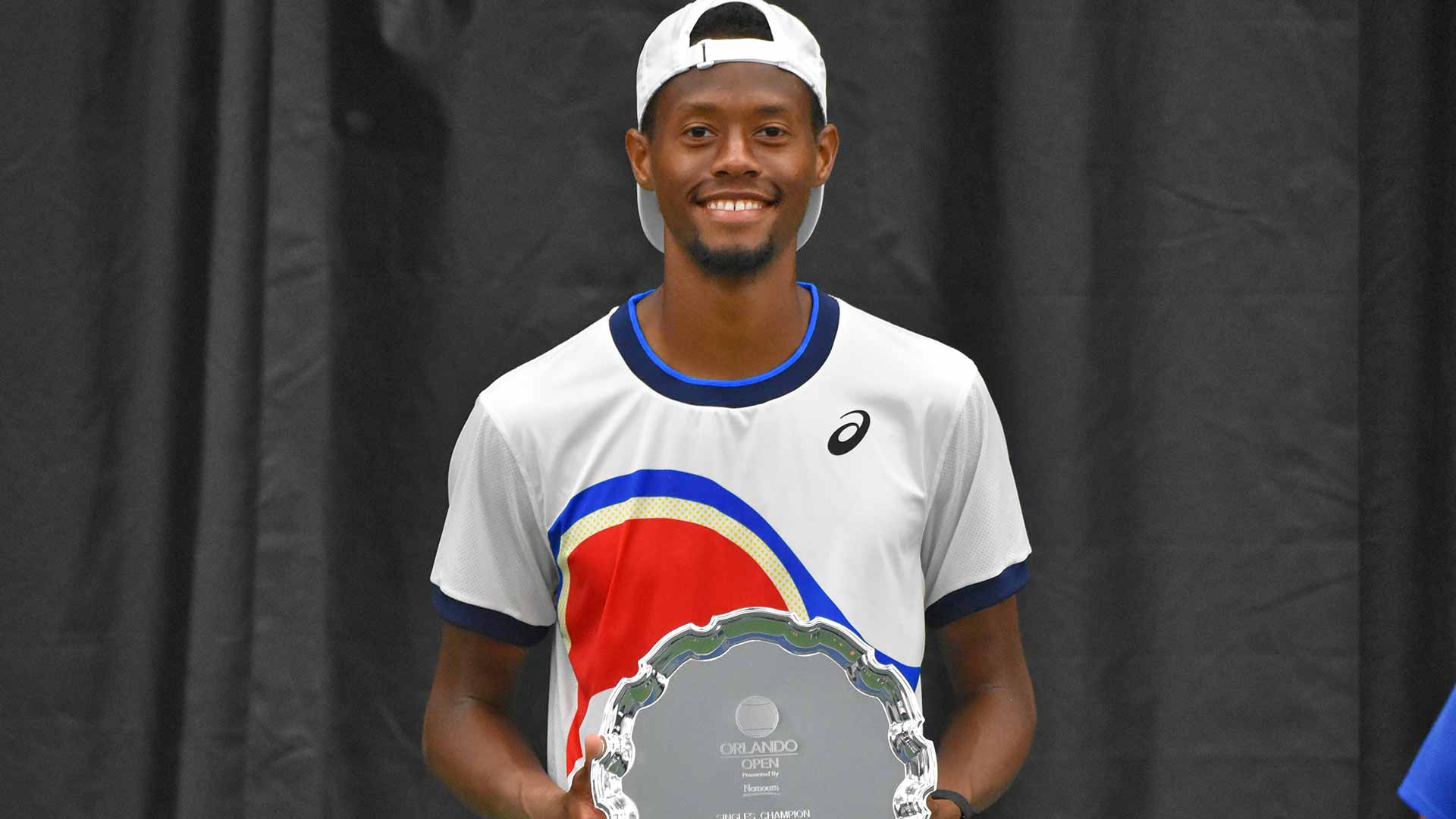 Congrats Chris. It’s been three years since your last singles title. How much were you thinking about that and how satisfying is this moment?
Of course, you can’t help but think about it. Three years is a long time out here. In 2018, I had just come out of college, was playing big tennis and didn’t really know what I was doing. As you start to gain more and more experience on the tour, a lot more factors came into your head: defending points, what surfaces to play on and other things.

But when you’re first starting, you just see the ball and hit it. Now, you look to maximize what you have and limit the turmoil and confusion. This week, I was able to get back to that innocence and play free and have fun. It did feel like a long three years and I was getting frustrated that I couldn’t continue my progression, but I am happy to take a title this week and continue moving forward.

This week, you seemed more relaxed and playing with some freedom. Would you say that’s an accurate assessment?
I’m definitely playing with a lot more freedom. I’m having a lot more fun than I’ve had in a while. I can’t remember the last time I was on the court and just relaxed, smiling and laughing at good and bad shots. It’s been a while since I’ve had that feeling. It’s definitely a point of emphasis just to relax and have fun. I definitely care about the result, but after a couple matches of seeing how I was able to play free, I was telling myself that I need to do it more often.

In the second set, the final moved indoors. You were down 6-2, 1-1. What changed after that?
I think it was a combination of some nerves and also Nico came out playing well. I wasn’t super super tight, but he was hitting the ball very clean. He was hitting the ball through the court and the conditions were fast. Usually I’m the guy making people feel that way, so it was new to me. He was locked in and reading my serve really well. That got me rattled when my serves would come back right at my feet. I was serving well in the other matches, but it’s tough to play free when the other guy seems to be reading it like a book.

In that second rain delay, [coach Philip Gresk] and I were just laughing and keeping it loose. When we moved indoors, I was able to come out playing more freely. I had a big game where I was facing a 15/40 and he didn’t break. At that point, I felt that I could turn the match around. That was a big opportunity for him, so I felt momentum going in my favour. I started connecting and serving well from that point.

It’s not just your first title, but your first final in three years. And you closed it out pretty emphatically in the third set. That must feel like a validation moment for you as well.
Absolutely. I went through a bit of a funk recently, where I couldn’t serve things out. I couldn’t serve out sets. Like at the ATP [250] in Singapore, I got broken serving out a set and that carried into other matches where I was up a break and couldn’t finish it. In one of my matches this week, I remember I served out a match and I told Philip how good it felt to serve one out for a change.

I’ve been winning tie-breaks but there’s nothing like being up a break and holding to the end. Getting through those last couple service games were big. I tried to stay as focused as I could. I held to love and 15 in my last two service games and was pretty locked in.

How do you translate this sense of playing free into continued success going forward? It’s a hard thing to do.
It’s extremely hard, but I think that being three years into my career and having that experience of playing free but then getting in my own head, making that mistake is enough to say to myself that I’m just going to keep playing like I’ve been playing.

Before the French Open, I trained a bit in Nice at the Mouratoglou Academy with Kerei Abakar. Kerei is very blunt and one of the things he said was that he followed by progress on tour from being No. 150 to around 240. He asked me what’s going on with my results? I said that I felt like I needed to tweak some stuff, because when I first started on tour I was just out there seeing the ball and hitting the ball. He said, ‘well go right back to that’.

He said that my serve and forehand are good enough when I’m playing free. Cut out all the extra noise and see ball and hit ball. Go back to that. That was the big thing this week. I didn’t do it so much at Roland Garros qualies, but I feel it does take some time to get back to that. I started connecting at the right times. I’m hopefully going to continue to progress doing that.

I must say that you and Frances Tiafoe [in Nottingham] winning Challenger titles today is pretty significant.
Oh man, that’s awesome. I didn’t even check his result yet. That’s great for him. Big Foe has been holding that mantle for a while for the Americans, especially the African-Americans, so to see him doing well on the grass and then me coming here and winning, it’s a positive sign. I was a little bummed waking up this morning and seeing [Felix Auger-Aliassime] lost [the ATP Tour final in Stuttgart], because I was hoping he could pull out his first title. That’s pretty cool though, I didn’t know Frances won. It’s a good day.

How are you celebrating?
I’m going to go rest. It’s a hot and humid week here. I’m going to hit the shower, get some food and just rest. I have no plans. I’ll take tomorrow off and get a lift in, in the gym, and then get back to work. Hopefully I can sneak into Wimbledon qualies. I’m currently not in, but we’ll see how that goes. If I don’t get in, I’ll just prep for the summer hard-court swing. That’s always a fun time.

French Open 2022: Schedule of Play for Wednesday May 25

Roland Garros: Tomljanovic stuns Kontaveit to reach second round | 24 May, 2022 | All News | News and Features | News and Events

Matthew Boyd Being Evaluated For Arm Discomfort After Early Exit

The article posted about Jason in here didn’t necessarily do him justice… (continued in comments) : motorsports

Leclerc disappointed, but enjoyed 'hard and fair' fight with Verstappen

Rolex 24 Hours of Daytona pt. I don’t even know, it’s been so long I forgot how many times i’ve posted photos

Kamaru Usman vs. Jorge Masvidal Added To UFC 261, Fans Are Back

Canal Plus agrees to pay more for F1 deal