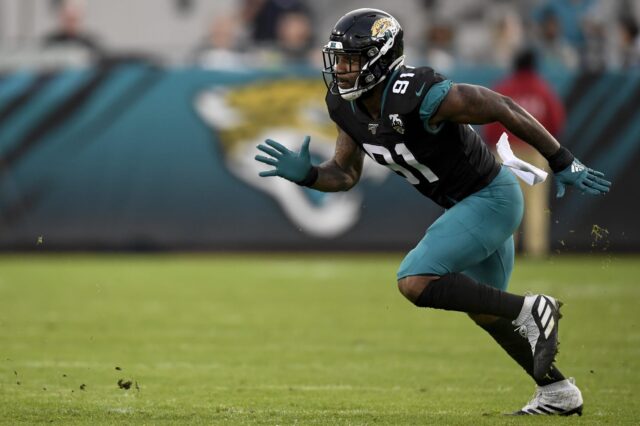 The Las Vegas Raiders know that they will need to be better on the defensive end if they want to make it back to the NFL playoffs.

The Raiders got the process started by bringing in Gus Bradley from the rival Los Angeles Chargers and made a splash in free agency when they agreed to a two-year, $26 million deal with Yannick Ngakoue. Ngakoue spent time with Bradley while with the Jacksonville Jaguars and should provide a major boost along the edge as Las Vegas has been missing someone who can get consistent pressure on opposing quarterbacks.

Ngakoue is well-regarded among his peers, and defensive tackle Solomon Thomas noted that he is excited to play with the pass rusher after his busy offseason.

Ngakoue posted on his Instagram a picture of him flexing and wrote that he was now 258 pounds. The 26-year-old is listed at 246 pounds, so it appears that he is managed to add 12 pounds of muscle during the offseason.

The Raiders ranked as one of the worst teams when it came to sacks, but an improved Ngakoue should help solve that problem as he will either earn them himself or create opportunities for players like Thomas. Assuming the defensive end lives up to his billing, the Silver and Black should be able to hang with any team on a weekly basis and set themselves up to make a playoff appearance.

Biting incident at Euro 2021: Rudiger appears to bite Paul Pogba's back in France vs. Germany

Pilot had no choice but to land in Minsk, says Ryanair boss – NationNews Barbados — nationnews.com

Aston Martin not fazed by problems and early finish

“Science is the man” – Saeed Ajmal Calls Out The ICC In Interview With Usman Khawaja : Cricket