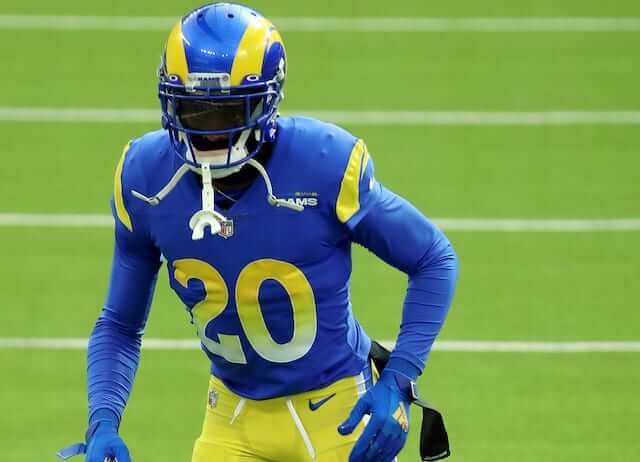 Los Angeles Rams superstar Jalen Ramsey is considered to be arguably the best cornerback in all of football.

The Rams made quite an investment in order to bring him over by parting ways with two first-round picks and a fourth-round pick in 2019. They then made an even bigger one to ensure his long-term stay by making him the highest-paid defensive back in NFL history with a five-year, $105 million extension with the Rams, including $71.2 million guaranteed.

Fortunately, Ramsey has proven to be every bit the player L.A. had hoped for coming off a 2020 campaign that saw him named as a first-team All-Pro. However, it appears not all outlets are convinced of his status among the league’s best players.

Ramsey allowed 11 or fewer receiving yards in eight games last season. In three more, he allowed just 22 yards over the game despite facing the opposing offense’s No. 1 receiver more often than not and allowing the rest of the Rams secondary to concentrate on the lesser receiving threats. Ramsey is a game-changer in coverage who makes an entire secondary better because of the knock-on effect of the easier assignments he creates for others.

Not only was Ramsey edged out of the top 15, but he also was not even recognized as the best corner in the NFL. That distinction instead went to Green Bay Packers cornerback Jaire Alexander, who checked in two spots ahead at No. 14.

Ramsey was the first Rams player to be named on this list. Of course, Aaron Donald later also made the list as well and came in as the No. 1 player in the league.

Despite his stellar play last year, it seems Ramsey still may have something to prove to those that have sided with Alexander. While a player of his caliber hardly needs any further motivation to be great, it is safe to say that such opinions will not go unnoticed in the 2021 NFL season.

Ramsey will have a chance to make his point with the Rams slated to square off against a number of teams that boast star wideouts. This list includes the likes of DeAndre Hopkins, DK Metcalf, Mike Evans, Allen Robinson and Justin Jefferson.

Should Ramsey find a way to contain another star-studded cast of opponents like he did last season, perhaps this could prove to be the deciding factor in the argument moving forward.

First Takeover Event Under the WWE NXT 2.0 Revamp Reportedly Set for Next Month

Chael Sonnen reacts after Amanda Nunes splits with ATT: “This is a peculiar situation which leads me to believe that this is personal”