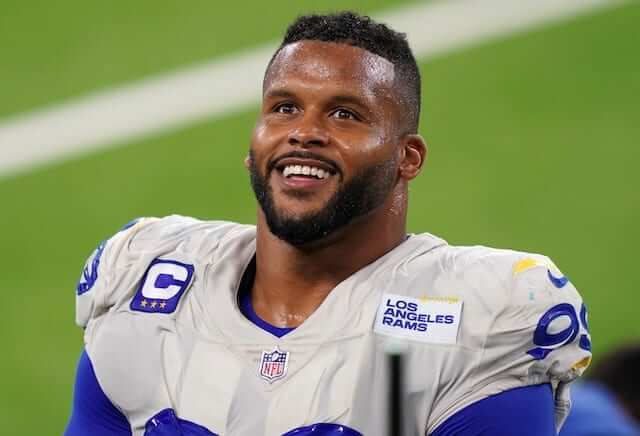 The Los Angeles Rams offense will be one to watch during the 2021 season with Matthew Stafford now under center, but the defense is also nothing to gloss over either.

New defensive coordinator Raheem Morris inherits what was the best defensive unit during the 2020 season and will have an opportunity to build on it with the pieces in place. Jalen Ramsey is arguably the NFL’s best cornerback as he will happily guard the opposing team’s best receiving threat, but the Rams defense is truly built around Aaron Donald.

Donald is a terror in the trenches and was awarded his third NFL Defensive Player of the Year trophy after his performance last season. Donald continues to see the accolades pile up as he was also named the top player in Pro Football Focus’ top 50 players right now list going into 2021:

No matter how good you think Donald is, you’re probably underselling it. The Los Angeles Rams star is an outlier the likes of which we haven’t seen in 15 years of grading at the NFL level. He is a unicorn in a league full of physical freaks and talented superstars.

It can not be understated just how dominant Donald is on an every-snap basis as he routinely makes plays either in the run or passing game. Teams have no choice but to double Donald, but even then it does not matter as he will find ways to disrupt plays and make an impact.

The defensive tackle shows no signs of slowing down and is well-positioned to have Los Angeles near the top of defensive rankings once again. Donald is an all-timer and the Rams are beyond lucky to have him.
Donald was not the only Rams player to make the list as Ramsey also came in at No. 16.

Sign Of The Times: Jake Paul Thinks He “Could Be Fighting Against Canelo.”

‘A good wake-up call’ for Blitzboks

Top 2021 lists led by best courses in each state