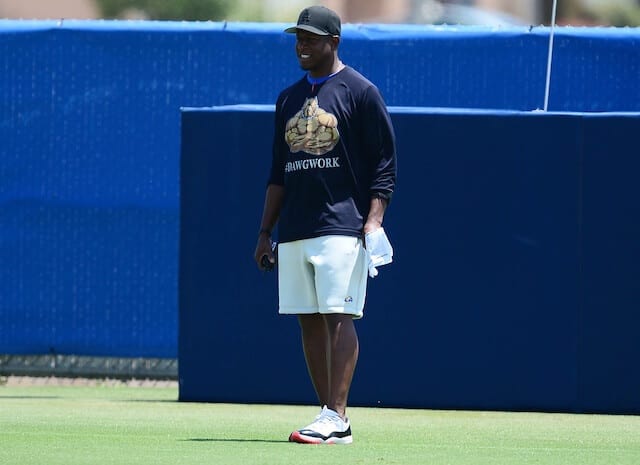 While most of the attention surrounding the Los Angeles Rams has been directed toward the offense this offseason, the defense has also undergone some significant changes of their own.

New defensive coordinator Raheem Morris has some big shoes to fill after Brandon Staley led the No. 1-ranked group in the league last season. Fortunately, he is inheriting a talented unit led by defensive tackle Aaron Donald and cornerback Jalen Ramsey.

The secondary suffered some key losses in free agency with the departure of John Johnson III and Troy Hill. Safety Taylor Rapp will be among those looking to fill the void left by his former teammates as he gets better acquainted with his new coach.

It is no secret that head coach Sean McVay’s staff has experienced some turnover in recent years. However, Rapp feels Morris’ energy and approach make him an ideal fit for the Rams, via Stu Jackson of the team’s official website:

“Raheem is an amazing coach,” safety Taylor Rapp said during a June 9 video conference. “He knows how to get to his guys. He’s very high-energy. You can feel his energy from across the field, probably across this whole state. Super excited to work with him.”

Rapp added that Morris has proven to be a bit of a player’s coach:

Expectations remain as high as ever in L.A. after emerging as Super Bowl contenders with the arrival of quarterback Matthew Stafford. Of course, the onus will fall on Morris to maintain the team’s high level of play on his side of the ball.

Rapp is going to be tasked with serving as Johnson’s replacement alongside Jordan Fuller over the top of this talented defense. Although a reduced role and injuries led to a quiet for him in Year 2, the former second-round pick still boasts starter experience from his stellar rookie season.

Rapp started 10 of 15 games in his first year that resulted in 62 solo tackles and two interceptions, with one of them being returned for a touchdown. There is bro question that Morris will be relying on his quality experience to pay some dividends in the 2021 NFL season.

For the first time ever, the Premiership final will be shown live on terrestrial television! : rugbyunion

Derek Carr Reacts To Carl Nassib Coming Out As Gay

Esteban Ocon: ‘I was young but didn’t have the right to fail, I had to succeed’ | Formula One