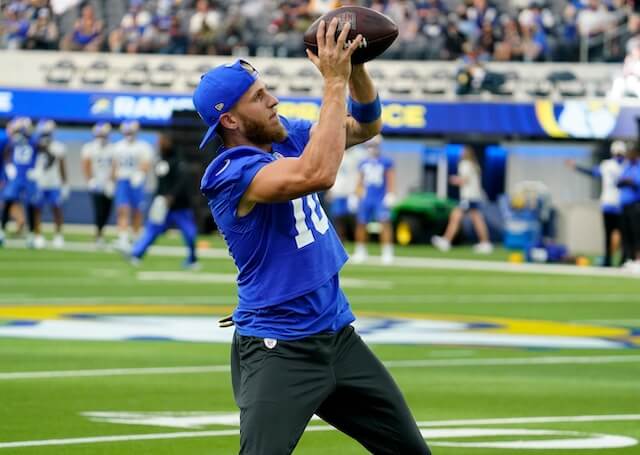 The Los Angeles Rams answered the call for more weapons on offense by securing a surplus of options in the receiving corps this offseason.

This unit is already led by one of the most productive tandems in the league with Robert Woods and Cooper Kupp. However, L.A. made sure to fulfill head coach Sean McVay’s wish of adding a deep threat by bringing in DeSean Jackson and Tutu Atwell.

The emergence of wide receiver Van Jefferson, tight end Tyler Higbee and running back Cam Akers in the passing game means there are plenty of mouths to feed for quarterback Matthew Stafford and head coach Sean McVay. Fortunately, having too many options seems to be a good problem to have in L.A.

Kupp is admittedly excited for the new dynamic of this group and their ability to line up anywhere on the field, via ESPN’s Lindsey Thiry:

“In some ways it’s a luxury,” Kupp said. “You’ve got such a deep group of guys and really the next best thing about it is that guys aren’t just locked in on one position, guys want to learn the entire offense, so you’ve got five guys that can play every position that you ask them to.”

Kupp’s comments are indicative of how many key players on offense felt this offseason. Last year’s Tampa Bay Buccaneers team proved that one can never have too much firepower to work with.

Kupp is embracing the influx of weapons for Stafford and what it could mean for this offense under McVay. After all, these additions will have little standing on his status as a go-to option in the passing game.

Both Woods and Kupp have displayed their ability to etch passes from anywhere on the field. It appears this versatility is something that plans to be shared from top to bottom in the receiving corps.

Having players fill in at a number of different positions allows some flexibility for McVay when coming up with a scheme. It will also keep players fresh and opposing defenses on their toes since they are each capable of getting the job done.

Regardless, there is still plenty of speculation regarding how the pecking order will play out behind Woods and Kupp. Although the arrival of potential playmakers like Jackson and Atwell has generated some hype, wide receiver Van Jefferson is also looking to take that next step in the 2021 NFL season.

Prithvi Shaw interview: ‘As Rahul sir is there, one will expect discipline in the dressing room’

Kevin McBride, 47, insists he will knock out 58-year-old Evander Holyfield to set up rematch with 54-year-old Mike Tyson