Martin Braithwaite is warming to the idea of joining West Ham or Wolves, but has ruled out another Premier League admirer, according to reports.

After representing Denmark at Euro 2020, Braithwaite must resolve his future at club level. He was something of a surprise signing for Barcelona in February 2020 and has only managed three goals in 40 La Liga appearances for them. Now, since Barca need to reduce their wage bill, he seems a likely candidate to be sold.

Indeed, a recent report claimed it was a “necessity” for the Catalan club to offload Braithwaite this summer. His stance on an exit is less clear-cut, but a return to English football may be likely for the former Middlesbrough striker.

Braithwaite has been regularly linked with West Ham, with rumours dating as far back as last summer. Since then, they sold Sebastien Haller in January and are still searching for a replacement.

A number of names remain on their radar, but Diario Sport back up the idea that Braithwaite is still in contention. However, he is also being looked at by Wolves and Brighton.

Of his three suitors, Braithwaite prefers West Ham or Wolves, but is not willing to join Brighton. 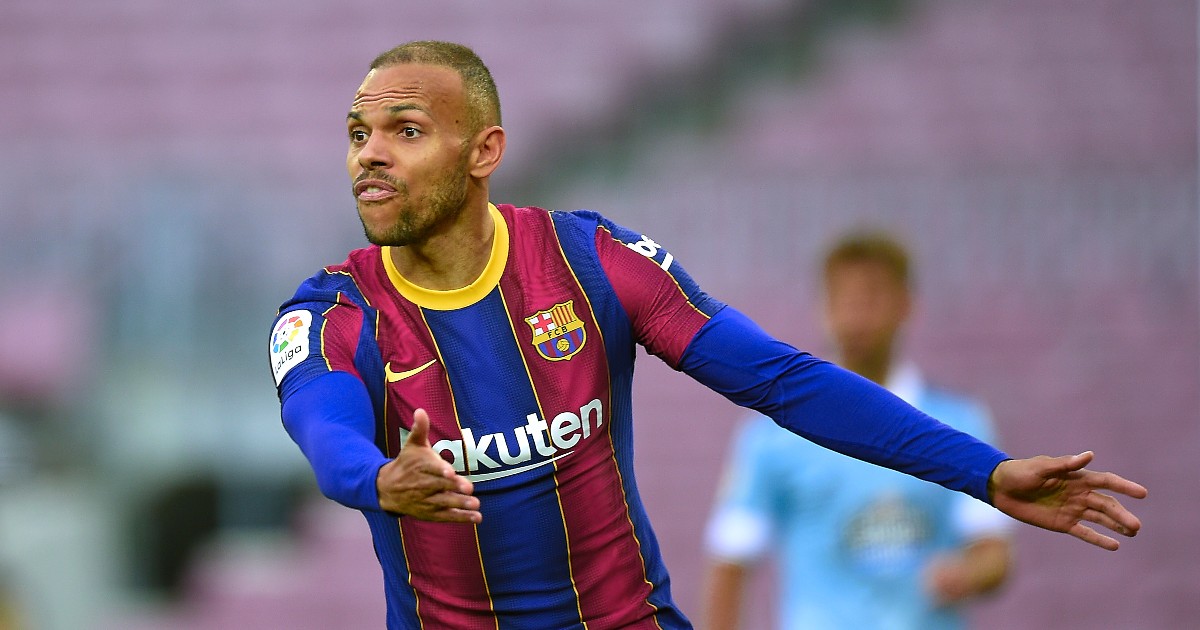 The forward is aware that the signings of Sergio Aguero and Memphis Depay will further limit his chances at Barcelona. Therefore, he is starting to consider his options more thoroughly for an exit.

West Ham still managed to secure European qualification without signing a replacement for Haller last season. To compete on four fronts this term, though, they need to find more depth – particularly in attack.

Wolves, meanwhile, have Raul Jimenez ready to return after a lengthy lay-off with a skull injury. It is not yet clear if he will be the same player as he was before, while 2020 signing Fabio Silva is still developing. Thus, an experienced alternative could be useful.

The asking price for Braithwaite, who is 30 years old, is €15m. Whether West Ham or Wolves would put such a sum on the table remains to be seen.

While Brighton may have been ruled out of the running by Braithwaite, they have been linked with another, more prolific striker in Odsonne Edouard.

Graham Potter’s side created plenty of chances last season, but only five teams scored fewer goals than them in the Premier League. No player reached double figures for them, showing an obvious area to improve.

The imminent sale of Ben White to Arsenal for £50m should give them funds to replenish several areas of their squad. They will likely need to find a replacement for the England international, but clearly require a centre-forward as well.

In that regard, the Daily Express claim they will make a move for Celtic’s Edouard after registering their interest in the Frenchman.

Edouard is in the final year of his contract at Celtic, where he has expressed a desire to leave. The Scottish giants will likely have to cash in on their top scorer from each of the last three seasons.

In the 2020-21 campaign, Edouard netted 22 goals in all competitions, despite Celtic failing to retain the title. His ability to score regularly even when his team weren’t performing as they should perhaps indicates he is exactly what Brighton need.

Celtic turned down a proposal that would have added up to £18m from Leicester earlier in the summer. Hence, Brighton would have to spend more than that – but they are keen not to go too far.

The selling club, meanwhile, do not want to let him go too cheaply. Therefore, they must find a middle ground. If they cannot, Edouard would be willing to see out the last year of his contract and move elsewhere on a free transfer in 2022.

Tsitsipas vs. Sinner, Zverev vs. Garin

Where Is IBF On Lopez-Kambosos Mess?