How F1 would have dealt with no cars on the grid 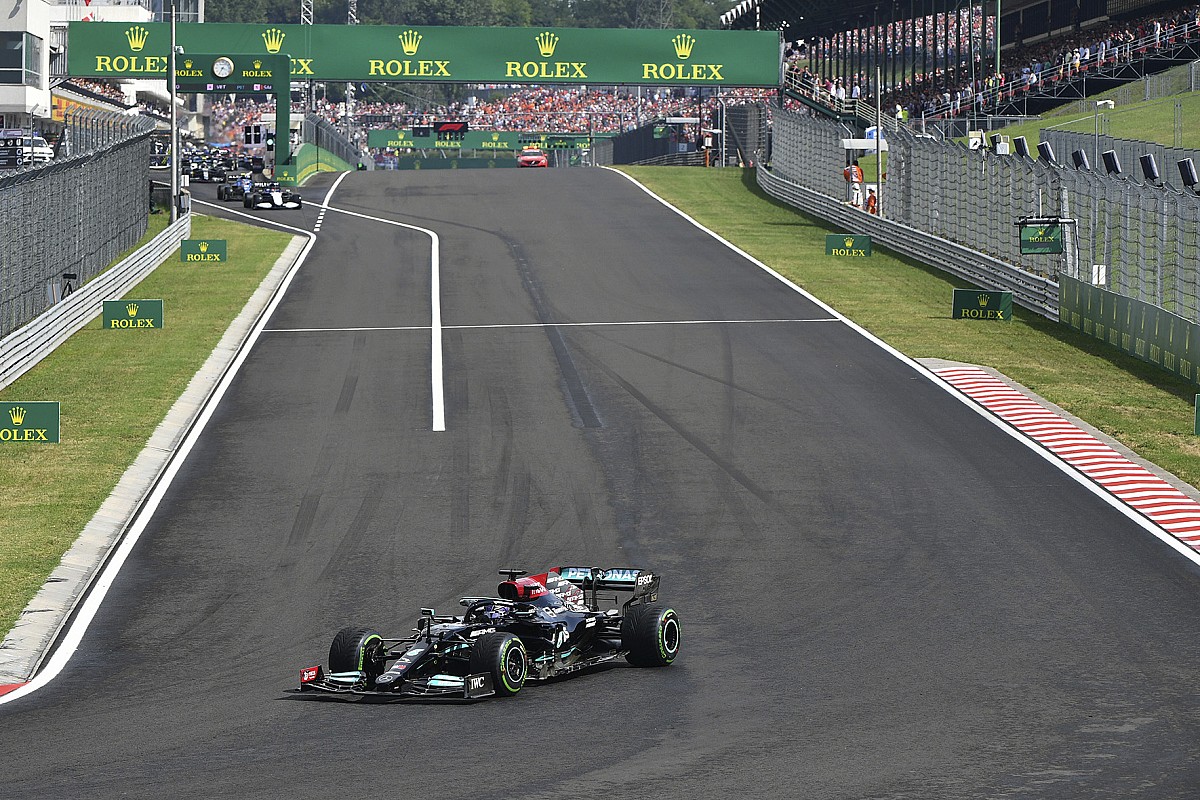 On the rapidly drying Hungaroring track, world champion and pole position man Lewis Hamilton was the only driver who elected not to dive into the pits to change from intermediates to slicks.

His Mercedes team had been worried that, with the team having the first box in the pitlane, coming in to swap tyres would have left Hamilton trapped after the tyre change and unable to get back out until the whole field had gone through.

While he would have regained some spots as others ahead of him would subsequently have had to wait, the fear was that he would still be dropped well into the midfield pack. It’s why the team took the gamble on sticking with the inters.

So as Hamilton was told to carry on and everyone else came in, it meant the Briton formed up completely alone on the starting grid.

Once he was stationary and the medical car was in place at the back of the grid, then the lights procedure went ahead as normal – and he was unleashed for an unchallenged run down to Turn 1.

Hamilton’s single car start was the sparsest grid start F1 has witnessed since the infamous United States Grand Prix in 2005 when all the Michelin runners pulled out and only six Bridgestone-shod cars took the lights.

But one of the most intriguing aspects about Hamilton’s start was that it was not inconceivable that the Mercedes driver could have pitted as well, meaning that no cars formed up the grid.

It’s a scenario that has never happened in grand prix racing before, but F1 race director Michael Masi said that he was clear in his head about what would have occurred in the event that the FIA had to deal with a zero car grid.

“Once the last car was in pitlane, the start signal would have been initiated,” he explained.

“Then once that went off, the green light at pit exit would have come on and it would have been the order from pitlane exit.”

In terms of the spectacle at home, the normal starting procedure would still take place, so the five red lights would still go through their regular sequence before going out even though there was nobody there to react to them.

Masi added: “Christian [Bryll, F1’s official race starter] would have activated the start lights, as per normal once the last car was in pitlane.

“It would be irrespective [of the pit stops taking place], because effectively the race from our side, or the resumption, hasn’t recommenced until that point.”

While the unique Hungarian GP start will secure a place in F1’s history books, Masi says that the lessons from it could prompt a more formal tweaking of the F1 sporting regulations to cover off the circumstances of a no-car start.

“It’s something no one could ever have really foreseen, but we’ll let things calm down and have a chat about it in the light of day with all of the sporting directors,” he said.

“But having spoken to some of them already up and down some of them have already said, ‘was it really a bad thing?…'”

3 things to watch for in Hall of Fame game

Why the Wallabies are losing the power plays against New Zealand

THIS GAME GOT HEATED! Dior Johnson VS Keyonte George Lives Up To The Hype!

NBA Daily: Where Do The Indiana Pacers Go From Here? | Basketball Insiders