“If I see the ball in my area, I have to play the shots,” says Rohit Sharma

Team India opener Rohit Sharma has defended the pull shot that led to his dismissal on Day 2 of the Trent Bridge Test against England on Thursday. Sharma fell for 36 at the stroke of lunch, trying to take on Ollie Robinson. All he managed though was to guide the ball into the hands of Sam Curran in the deep. Admitting that he was disappointed to have gotten out just before lunch, the batsman added that he will keep playing his strokes if the ball is there to be hit.

He added that it was important to take the odd chances since England’s bowlers would not give them many loose balls. Rohit continued, “So, you have to take your odd chances when the ball is there, you got to punish them. Of course, you know, when it’s around the time of close of play, you feel disappointed and that is what I am feeling about it (the dismissal).” 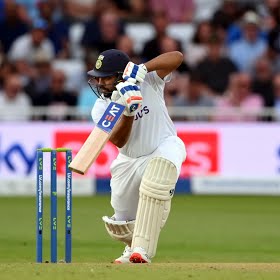 ”But you got to be ready to play your shots as well, because their bowlers are so disciplined, you hardly get anything. So, you got to put the balls which are your shots and in your area you got to put that ball away and that is what me and KL (Rahul), when we were batting, we were on that thought process,” he added.

The 34-year-old pointed out that there is a thin line between getting out and getting runs off aggressive strokes. He explained “If feel like taking a couple of shots on, we are not going to shy away from that, we will play those shots. While doing that if you get out; I mean yes you feel disappointed, but you know there is very thin line between getting out like that and that same delivery or same ball, if it… the catch was slightly away or five yards left and right of the fielder, it could have been either way as well.”

Rohit and Rahul added 97 for the opening wicket but India suffered a collapse after that to end a rain-shortened day at 125 for 4.

Another WWE Name Released After Nearly Thirty Years With The Company

Ferrari: We must show know how to get back on top

Something you don’t usually see in a male-dominated sport which is a female mechanic. It was lovely to see her there awhile back. : formula1