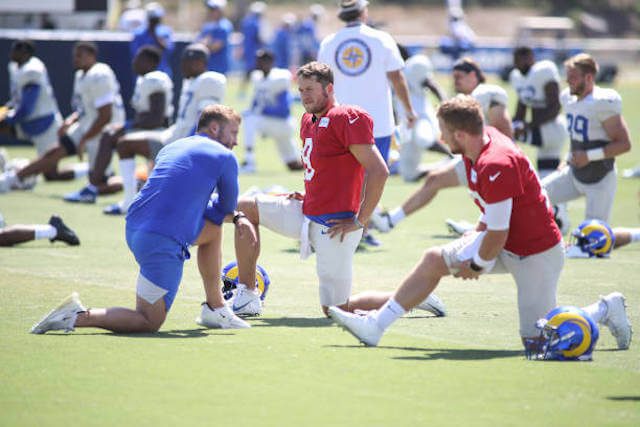 Stafford’s hand reportedly came down on a teammate’s helmet while throwing a pass. Fortunately, the contusion was not deemed to be too serious and he has since been able to practice in full.

Regardless, it could have been much worse considering it was the thumb that Stafford had surgery on during the offseason. The team’s track record with such incidents under center has spurred them to take precautions moving forward.

Head coach Sean McVay revealed that offensive and defensive lineman will be wearing padding on their helmets for safety purposes moving forward, via Cameron DaSilva of USA Today:

“You know, (equipment manager) Brenden Burger had a couple of those and then the heightened sense of urgency based on what happened the other day. Better safety, no swag with those things on, but hey, we’ll be safe and smart,” McVay said after Wednesday’s practice. “And you know, guys were great about it because they understand exactly why. It’s kind of the concussion preventative maintenance, but also most importantly, what happened the other day. You know, it was just with the quarterbacks finishing over the top, coming down on those helmets, that’ll definitely soften the blow and you don’t have to worry about, ‘Did our quarterback break his finger?’ And things like that, hopefully.”

While it may not be the best look, the Rams have opted to err on the side of caution, via ESPN’s Lindsey Thiry:

Rams offensive linemen also are sporting padded protection on the outside of their helmets. pic.twitter.com/HsMbbDWE08

McVay’s cautious approach is certainly understandable considering the Rams are all too familiar with these incidents. Former quarterback Jared Goff broke his thumb late last season in a similar fashion right as the team was gearing up for their playoff run.

L.A. once again paid a heavy price tag in order to keep their Super Bowl hopes alive with their blockbuster acquisition of Stafford. Their top priority is to ensure that he is healthy enough to make it come to fruition in the 2021 NFL season.

Aside from protecting Stafford, the extra padding will reduce the level of contact between the lineman. After all, the Rams can ill afford to suffer any significant setbacks to key positions this season.

McVay has already made it clear that running back Darrell Henderson will not be taking part in any preseason games.

Millman into quarterfinals at Washington | 6 August, 2021 | All News | News and Features | News and Events

Kyler Murray disowned Dallas Cowboys for losing, but not the Cardinals?

Rules of Golf explained: What happens if you find a lost golf ball then lose it again?

FP1: Hamilton – ‘I feel massively down on power’ : formula1