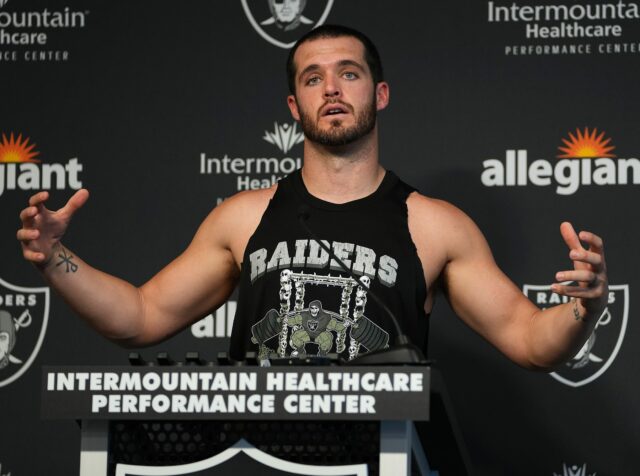 The Las Vegas Raiders will again rely on quarterback Derek Carr to produce as the centerpiece of this revamped offense heading into the 2021 NFL season.

Carr has served as a stabilizing factor between multiple stages in the team’s rebuild. While the journey has come with its fair share of ups and downs, he remains as anxious as ever to get this team back to the playoffs.

The only thing that is different about Carr compared to his last postseason trip is the notable features of Father Time. Fortunately, it does not appear to be taking too much of a toll on his overall psyche.

The 30-year-old has successfully transitioned into the veteran stage of his career. Despite no longer being in his twenties, Carr admittedly still feels like he is.

“Honestly, the only thing that’s different is I got gray hairs in my beard. I haven’t grown it out in a while, I was like, ‘Bruh, I got like five gray hairs. What is going on?’ But me and Yannick [Ngakoue] were talking about this, he’s like, ‘You’re 30 now?’ I was like, ‘Yeah, I’m 30 now.’ He’s like, ‘How do you feel?’ I was like, ‘I feel like I’m 20.’ I honestly believe this, like our generation, the way that we’ve taken care of our bodies with football, I think 30 is like the new 20. I feel like I could play another 15 years without a doubt. Nothing is hurting. It’s middle of camp and I feel great. I feel strong in the weight room. I feel fast, I feel explosive. And I think it’s the way we train now, and that comes with science and that comes with more understanding. I honestly feel stronger, faster, better than I did when I first got to the NFL, and that comes with more knowledge on how to train and how to eat and how to take care of your body. And that takes a little bit of money sometimes, but it’s definitely worth it because I’m sitting here in Year 8 and I remember people ahead of me talking about Year 8, like I’m miserable and they can barely walk out of bed. I’m blessed man. I don’t have those problems, and I’ve had broken bones and all these things. But the way they rehab and stuff nowadays, I feel great.”

The fact that Carr is feeling better than ever, both physically and mentally, is certainly an encouraging sign for the team’s franchise cornerstone moving forward. But, of course, this should hardly come as any surprise given the number of resources that modern-day professional athletes to keep themselves healthy for as long as possible.

Although Brady’s success has given quarterbacks something to aspire to, only a select few may be able to scratch the surface of the success he enjoyed at this stage in his career. Only time will tell if Carr will be one of them.

The Minnesota Timberwolves demand to be taken seriously