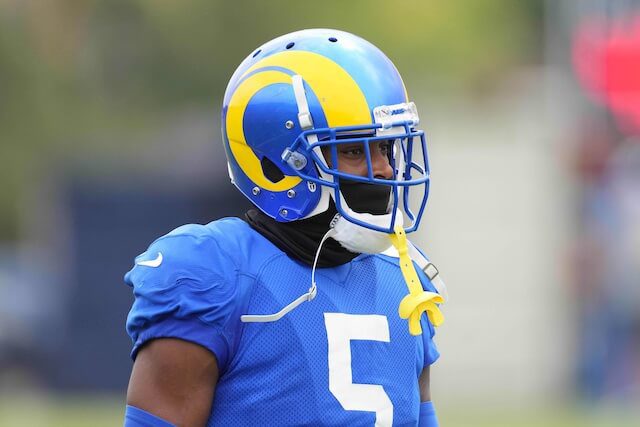 The Los Angeles Rams have made the most out of their joint practice sessions with the Las Vegas Raiders leading up to their preseason showdown in Week 2 at SoFi Stadium.

Both teams are relishing in getting their first real look against another team. Even if tempers started to flare at times, head coach Sean McVay was happy with the reps the Rams got on both sides of the ball.

One of the biggest storylines to come out of these sessions is the matchup between cornerback Jalen Ramsey and wide receiver Hunter Renfrow. Despite being regarded as the league’s premier shutdown corner, reports indicated that Renfrow managed to get the better of Ramsey on more than one occasion.

All the talk did not go unnoticed by Ramsey and he made sure to clear the air on some of the things being reported out of camp, via Cameron DaSilva of USA Today:

Ramsey added that despite all the noise, he still has plenty of respect for Renfrow’s game:

“I get that sometimes mentioning my name going against certain receivers may give them buzz and it may pump them up some – and this is no disrespect to Hunter Renfrow because I actually think he’s a pretty good player. I think he has some Cooper Kupp in him,” he continued. “But I didn’t have no issues yesterday. Watching the film, I played pretty well yesterday. Maybe people just need to learn the differences between zones and man and schemes. It doesn’t really bother me, but I feel like sometimes you’ve got to set the record straight sometimes and then you just leave it at that and tell people to enjoy their day. It’s just fun really. It’s nothing major.”

There is no question that there is a stark difference between squaring off against Ramsey in a practice setting as opposed to a live game situation. Given that the All-Pro was getting some reps in on the slot, it is safe to say that this was one of those instances.

Of course, this is hardly the first time that Ramsey has had to set the record straight by clearing his name. If history is any indicator, he is primed for yet another dominant season a the NFL’s top shutdown corner.

Editor's Pick: 'I had to get up the mountain to see what I had left.' As Nigel Benn prepared for one fight he was trying to forget another

Back Our 10/1 Premier League Bet

Manish Pandey may no longer get a chance in ODIs for India: Virender Sehwag

Kelly Oubre on Hornets’ style: “This is probably the most fun I’ve had in my career playing basketball”