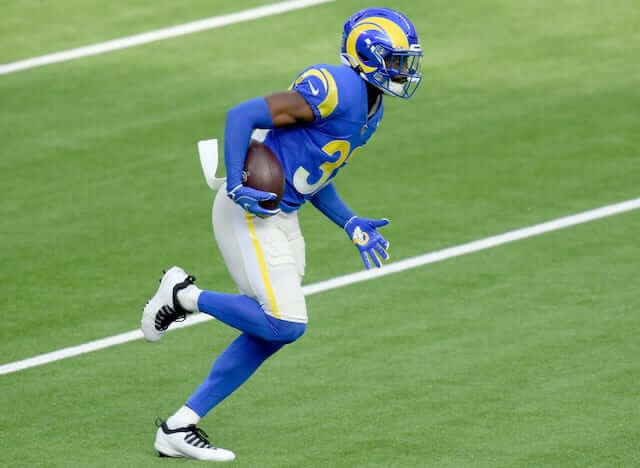 Although this year’s team captains for the Los Angeles Rams consisted of mostly familiar faces, there was one surprising new addition in safety Jordan Fuller.

The Rams struck gold by taking Fuller in the sixth round of the 2020 NFL Draft after emerging as a key starter for the secondary during his rookie year. He has since managed to take that leap to become a leader alongside cornerback Jalen Ramsey over the top of this talented defense.

The 23-year-old’s newfound status is indicative of his efforts both on and off the field. Being named one of eight team captains is not an honor he is taking lightly.

Fuller spoke on how much it meant to him and even compared it to becoming one of a handful of two-time captains at Ohio State, via Stu Jackson of the team’s official website:

“It means so much,” Fuller said. “It’s probably one of my biggest achievements to this day, aside from being voted captain at Ohio State. So yeah, this is huge. Love my teammates, love this team, this organization. I give my all everyday, and I’m just grateful I’ve gained the respect of my teammates. I know it doesn’t stop here, but I’m definitely very grateful.”

Fuller made it clear that he would be looking to step up as a leader after the secondary suffered some significant turnover by losing two starters in free agency this offseason. Fortunately, his pedigree as a team captain just goes to show how well his skill set has translated to the next level.

Of course, this means expectations will be much higher for Fuller moving forward as a key member of the top-ranked defense from last season. Fortunately, L.A. has done a stellar job of shoring up some quality depth alongside him in the mid-to-late rounds.

Fuller registered 60 tackles, three interceptions and five pass deflections while starting 12 games as a rookie. He will now be pairing up with Taylor Rapp, who also gained plenty of quality experience by starting in 10 games his rookie year during the 2019 campaign.

Checking in behind them at safety are Nick Scott and Terrell Burgess, who was also been in the midst of a promising rookie year until he was sidelined with a season-ending ankle injury. JuJu Hughes and J.R. Reed help round out this promising young group heading into the 2021 NFL season.

One Night in Leeds: Lara vs. Warrington II

Newcastle in contact with Dele Alli but want clause added