The Solheim Cup that changed everything

It was not only the finest European performance in Solheim Cup history, but the most important, writes Alex Perry

To think a few years ago golf fans were arguing for the European Solheim Cup team to be opened to the rest of the world to give them a chance against their dominant American rivals. As recently as 10 years ago, we wondered if the tournament could ever be competitive.

That argument has been well and truly put to bed this week in Ohio, where the visitors triumphed 15-13 in a nail-biting encounter at Inverness.

When we asked the GOAT and Solheim Cup legend, Annika Sorenstam, for her opinion on the matter, she was having absolutely none of it, saying that “one day we will have dominant players and this question won’t be asked again”. (I think I may have actually annoyed her.)

One could argue that day has come. 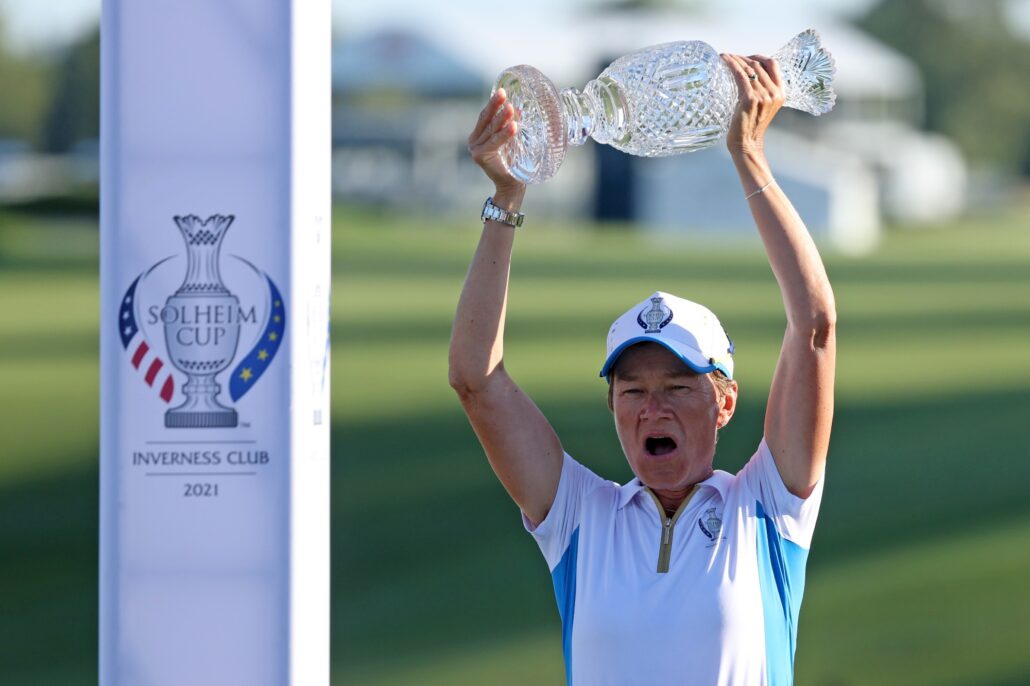 The powers that be behind the European team, like their Ryder Cup counterparts, have done a phenomenal job in making sure their American rivals don’t turn the competition into a one-sided affair.

And when it all clicks into place, like it has this week – or like it did at Gleneagles, and Colorado, and Killeen Castle and so on – it makes you wonder why the question was ever asked at all. Victory at Inverness means Europe lead the USA 4-2 for Solheim Cup wins in the last decade.

For Catriona Matthew, she can add captaining a winning team on US soil to her already impressive CV. The one they affectionately call ‘Beany’ will fly home to Scotland as the first two-time winning European skipper.

It was a Solheim Cup that swung one way to the other and it’s been pure box office from start to finish.

Matthew played a blinder with her picks this week. Open champion Anna Nordqvist and Matilda Castren combined to take two from three, while veteran Mel Reid and rookie Leona Maguire first took down the Korda sisters, before thrashing Nelly Korda and Ally Ewing, then showing serious guts to scrape a half while one down with one to play against Jennifer Kupcho and Lizette Salas.

Some real Graeme McDowell-Victor Dubuisson vibes from that pairing. 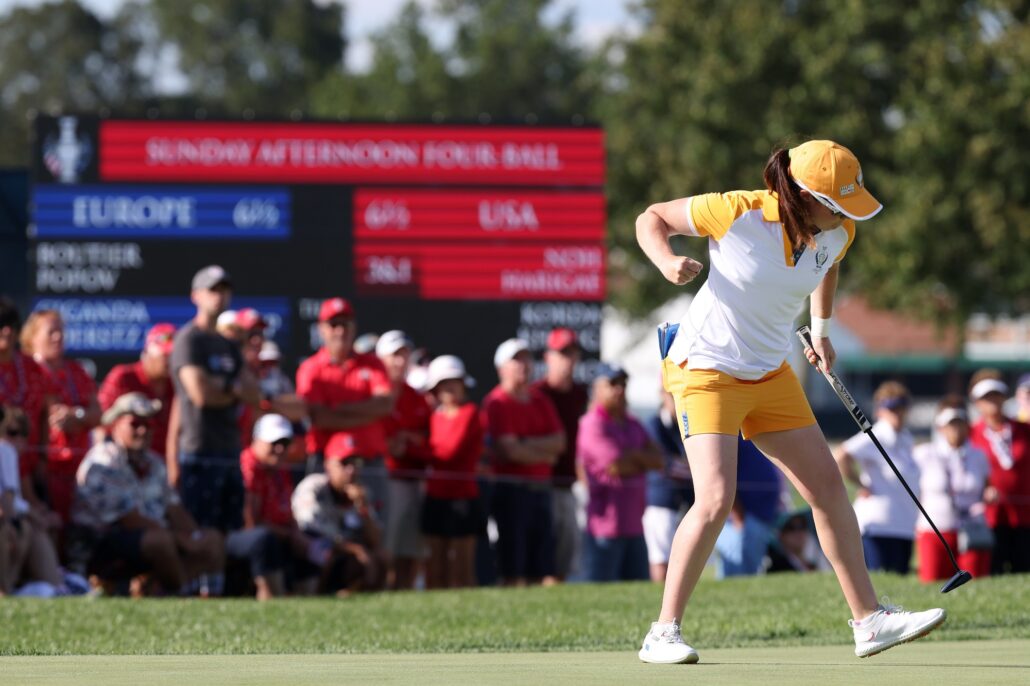 The singles matches brought some great match-ups. The world finally got to see what Maguire could do and she opened the Monday scoring by thrashing fellow rookie Kupcho, who will be glad to see the back of the Irish assassin.

Celine Boutier and Madelene Sagstrom gave Mina Harigae and Ewing respective hidings, before a sea of red filled the scoreboard.

In the end, just like it was four years ago, it came down to a gutsy six-footer at the last. Castren, with the kind of ice-in-the-veins finishing we’ve come to expect from Scandinavian players down the years, rolled it home to ensure the trophy would be heading back to Europe.

Then it was a matter of winning it outright.

Step forward Emily Pedersen. Just for a fun twist in this tale, Pedersen’s boyfriend, Olly Brett, caddies for opponent Danielle Kang, and the pair enjoyed a sweet moment on 18 after the Dane rolled in her birdie putt that gave Europe that all-important two-point gap.

Of course it wouldn’t be a Solheim Cup without a bit of controversy.

When Nelly Korda’s putt at the 13th, in the first day afternoon fourballs, just stayed out and Madelene Sagstrom tossed the American’s ball back to her, no one thought anything of it.

Except, it soon became apparent, for a rules official, who deemed Sagstrom had scooped up Korda’s “overhanging” ball without giving it the required 10 seconds to see if it would drop.

Social media was aghast at what happened. It killed the entire mood of the match and, let’s face it, no one wants to win that way. And Korda and partner Ewing could have righted the wrong by conceding the very next hole.

But as my far more learned colleague Steve Carroll correctly points out, you cannot pick and choose which rules to apply.

The lesson? Don’t touch your opponent’s ball. Ever. Seriously, just leave it alone.

Is there a petition to have the Solheim and Ryder Cups in back-to-back weeks? Or, dare I say it, on the same week at the same venue?

Also, can we finally get a regular mixed event? How cool would that be?

Please don’t flood into the comments calling me “woke”. You know you’d watch that too.

Patrick Cantlay’s story is remarkable. He was the the No 1-ranked amateur golfer for 54 consecutive weeks – a record that still stands – and was the low-am at both the Masters and US Open. Then he turned pro and suffered a back injury while warming up on the range. That turned out to be a stress fracture and he only played nine times in the next three seasons.

During that time, he had to go through the unthinkable when his best friend and caddie, Chris Roth, was killed in a hit-and-run as the pair crossed the street in Los Angeles.

Eighteen months later, he opened his PGA Tour account at the Shriners Hospitals for Children Open.

He added the Memorial Tournament in 2019, but it’s this season that we’ve really started to see the Cantlay that, as an amateur, was held in higher regard than the likes of Justin Thomas and Jordan Spieth.

Cantlay started his year with a win at the Zozo Championship, before adding another Memorial title in June. He beat Bryson DeChambeau last week in a pulsating BMW Championship play-off, and now he’s the FedEx Cup champion after holding off Jon Rahm in the season finale at East Lake.

It couldn’t have happened to a nicer guy.

Cantlay had started the week saying he doesn’t like the FedEx Cup finale format, in which players are handicapped from the beginning depending on their position in the standings.

The Californian said it was ludicrous that the player who shoots the lowest score in the tournament doesn’t lift the trophy. (And in this writer’s opinion, he’s absolutely right. The European Tour have proven you can quite successfully have a single tournament winner as well as a season-long champion.)

Nothing like a bit of sibling jealousy to get you fired up.

Nicolai Hojgaard has watched twin brother Rasmus win three times already on the European Tour, so he had to get a slice of the action, lifting the Italian Open with a one-shot victory over Tommy Fleetwood and Adrian Meronk.

And how’s this for a stat?

Makes you feel old, doesn’t it?

Get them on the plane, Padraig!

Right, that’s enough from me. Remember if you don’t have Sky you can watch what promises to be an incredible final day of the Solheim Cup absolutely free. You don’t want to miss that.

Have a great week, whatever you’re up to.

Chris Eubank Jr. Questions The Legitimacy Of Billy Joe Saunders Injury: "There Was No Smashed Orbital Bone, He Quit"

I have created a virtual AI racing series, I thought you guys might enjoy it! : motorsports

Who’s your favourite cricketer? Kid: I don’t have one, I just want to play soccer : Cricket

Bianca Belair Invites Pop Star to Wrestle with Her In WWE

Bastianini ready to make his mark in MotoGP™ at Jerez