Novak Djokovic: ‘I’m Going To Treat This Match As If It’s My Last’ | ATP Tour


Novak Djokovic made clear he is prepared to put everything on the line to lift this year’s US Open trophy after advancing to the final on Friday evening with a thrilling five-set victory against Alexander Zverev. The Serbian is one win against second seed Daniil Medvedev away from becoming the first man to complete the Grand Slam since Rod Laver in 1969.

“I’m going to treat this match as it’s my last one because it’s arguably the most important one of my career maybe. Maybe not, I don’t know. But of this year, for sure,” Djokovic said. “It’s going to be a battle against another guy who has been in tremendous form, Medvedev.”

Djokovic recalled a press conference during the 2009 NBA Finals when a reporter asked legend Kobe Bryant why he was not visibly happy after the Los Angeles Lakers took a 2-0 lead against the Orlando Magic.

“What’s there to be happy about?” Bryant asked the reporter. “Job’s not finished.”

“He’s been someone, as probably millions of athletes and people around the world, have been looking up to him, admiring him. That’s kind of an attitude I have. Job is not done,” Djokovic said. “Excitement is there. Motivation is there, without a doubt. Probably more than ever. But I have one more to go.” 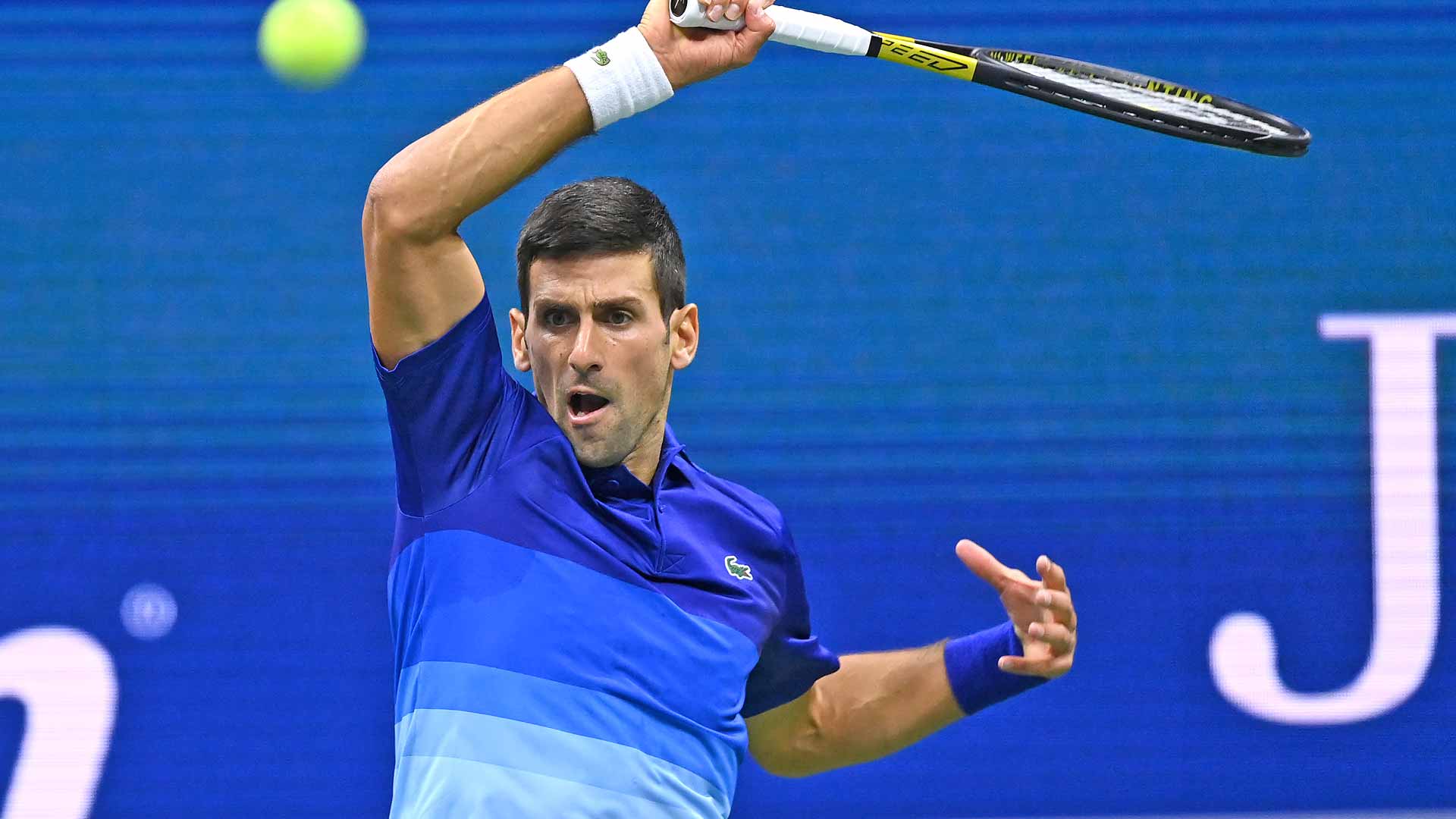 Novak Djokovic” />
Photo Credit: Garrett Ellwood/USTA
The World No. 1 is aware of the hoopla surrounding his historic chase. But instead of allowing the pressure to swallow him, the Serbian is just worrying about his preparations.

“I’m just trying to lock into what I know works for me,” Djokovic said. “I have my routines, I have my people. I isolate myself. I gather all the necessary energy for the next battle, only the next match, the next match.”

In the 2015 US Open semi-finals, Serena Williams was two wins from completing her own Grand Slam. The American icon fell short in the last four against Italian Roberta Vinci.

“I can relate to what she’s been going through right now,” Djokovic said. “I understand it now. Obviously, once you’re in that situation, you can really comprehend what a player goes through.

“I understand why she wanted to avoid all the questions about it because in the end of the day, you have to go out on the court and deliver. You’re expected to always win. For a great legend that she is, she always has that expectations from everyone, including herself.

“It’s no different with me. We all have different formulas that work for us in terms of how we want to feel on the court, how we prepare ourselves, how we recuperate.”

Djokovic was in danger of suffering the same fate. However, he was able to claw by Zverev, who entered their clash on a 16-match winning streak. The German ended the World No. 1’s hopes of winning a Golden Slam in the semi-finals of the Tokyo Olympics six weeks ago.

“It was a great win. I’m proud of the fight that I delivered. I probably could have played better in some moments. Again, I have to be satisfied with delivering the best tennis I possibly could in the most important set, which was the fifth set,” Djokovic said. “Just looking forward to another battle on Sunday.”

The top seed is plenty familiar with the only man standing between him and history: Medvedev. Djokovic leads their ATP Head2Head series 5-3, including a victory in this year’s Australian Open final.

“I’m sure he’s going to give it all to win it, to win his first Slam. On the other side, I’ll be giving it all I possibly got in the tank to win this match,” Djokovic said. “I’m focussing on recovery, recalibrating all the systems for Sunday. I’m not going to waste time or energy on anything that can just be a distraction and deplete me from the vital energy that I need for Sunday.”

Djokovic has spoken about visions he has of holding major trophies, so a reporter asked what image he has in mind for Sunday.

“Exactly that one,” Djokovic said. “Holding the trophy.”

3 causes for concern in Week 11