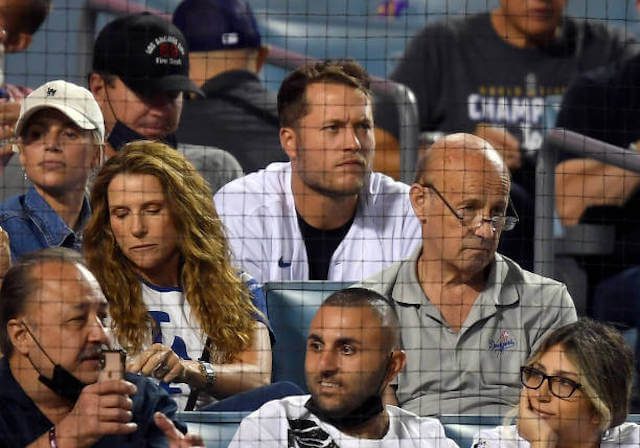 Los Angeles Rams quarterback Matthew Stafford is taking in the scenery of his new home to start the 2021 NFL season.

Following a stellar performance in his debut at SoFi Stadium, Stafford made his way to Dodger Stadium to watch his old friend and pitcher Clayton Kershaw make his return to the mound after missing the last two months while dealing with left forearm tightness.

Kershaw did not disappoint with Stafford in the house as he allowed just one run on four hits over 4.1 innings of work during the Dodgers’ 5-1 win over the Arizona Diamondbacks. His solid outing left many fans like Stafford in smiles, via Dodger Blue:

There is no question that the pair have come a long way since their humble beginnings growing up playing baseball, basketball and soccer together in University Park, Texas. The fact that they now get to watch each other perform in the same city at the highest level certainly makes it even more special.

It is a busy time for Kershaw with him overcoming an injury while gearing up for the team’s upcoming title defense in the postseason. However, it may only be a matter of time before he decides to return the favor by watching Stafford do his thing just 13 miles over in Inglewood.

“I wanted to go to his game [Sunday], but first time pitching, I didn’t want to do too much so I kind of chilled at home and watched. I was excited to watch him, he played awesome,” Kershaw said. “I know he’s excited to be there. For him to come out and show support the day after was really cool. We’ve known each other for a long time and we played a lot of sports together growing up. It’s always fun to have somebody to chill for in another sport, and Matthew is that guy for me. Now that we’re both in L.A., it’s kind of full circle. It’s pretty cool.”

Like the Dodgers, the Rams came into the season with championship expectations and have made one blockbuster trade after another in order to make it come to fruition. Stafford’s effort in the 34-14 win over the Chicago Bears in the season opener has helped lend some credence to the hype.

The veteran quarterback has been welcomed with open arms and he has clearly wasted no time making himself at home. Stafford’s connection with another star figure in the city in Kershaw has only helped further cement the reasoning behind his move this offseason.

Alexa Bliss says a fan is threatening to shoot her and her husband, police notified