There’s cornerback Jalen Ramsey, the one who is extremely smart and talented and rides with you when you’re correct, but won’t hold back if he thinks you’re wrong.

Then there’s cornerback Darious Williams, or “D-Will” for those in the know. He’s the analytical one who will take a deep dive into whatever the day’s lesson is.

Cornerback David Long Jr., or “D-Lo” — never to be mistaken for “D-Will”, though they are good friends — is the one who puts in constant work to better his craft and prove that he’s eager to grow.

Safety Jordan Fuller is perhaps better known now as captain after he was voted one by teammates. He’s the serious one, known to be mature beyond his 23 years and one NFL season. 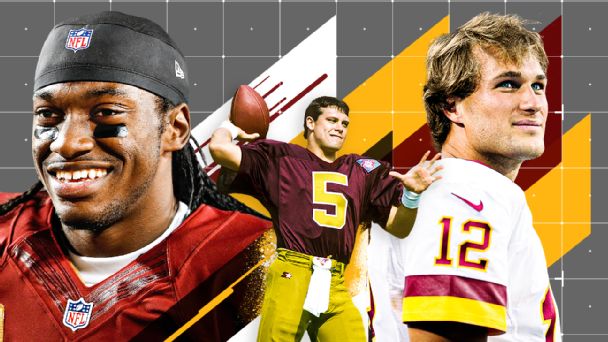 • Ranking Washington’s past 30 QB starters
• Giants remain all-in on Daniel Jones as QB1
• Trey Lance the key to 49ers’ run game?
• McCaffrey opens up Panthers’ playbook
• Cowboys need to get rushing game going
• After one week, Saints have No. 1 defense

And finally, there’s safety Taylor Rapp. A sawed-off, ready-to-go guy who is fun to tease because you’ll get a rise out of him, quickly.

Meet the starting five in the Rams secondary, a group that will be depended on in a quest to produce the NFL’s best defense for a second consecutive season and help the Rams earn a trip to Super Bowl LVI.

“We just have a lot of good players, but we have a lot of fun together,” said Fuller, a sixth-round pick in 2020 and second-year starter. “It’s fun to come to work, honestly. We’re laughing all day long, but really about the work at the same time.”

The group’s skillset and personality were on display in a 34-14 victory over the Chicago Bears in Week 1, as they tantalized quarterback Andy Dalton into haphazard throws, brutalized his receivers when the ball was in their hands, then wildly celebrated every stop.

On the opening drive, Long grabbed a tipped pass in the end zone to end a Bears’ scoring threat and set up a touchdown drive that gave the Rams a quick 7-0 lead.

“I just felt like the last few years that I’ve been here, I’ve bene preparing for this moment,” said Long, a third-year pro and first-year starter.

Later in the first quarter, Ramsey made three tackles for a loss, highlighting why Morris made the call to play him all over the field this season, on the inside and out, so he can be involved in more action and not be lulled into boredom that occasionally comes from being a lockdown corner and having quarterbacks avoid him at all costs.

“I’m being put in positions that I’ve never been put in before to make plays and do things for the team,” said the two-time All-Pro.

Williams chipped in seven tackles and a pass deflection, while Rapp had eight tackles. In his first game as the defensive signal caller, Fuller led the team with 11 tackles.

“I’m proud of everybody in that room,” said Ramsey, who had nine tackles and a pass deflection. “It takes a lot to do what we’re doing. A lot of guys are asked to do different roles this year, bigger roles this year.”

Entering the season, questions lingered how the secondary would respond following the departures of safety John Johnson III and cornerback Troy Hill, both of whom signed with the Cleveland Browns in free agency.

A third-round pick in 2019 who had only one career start entering the season, Long experienced growing pains throughout camp, particularly in a joint practice against the Dallas Cowboys and receiver CeeDee Lamb. But Morris and teammates continued to express confidence in Long, who will be depended on to play a versatile role this season.

“We got Raheem — I was just eager to just feed off of his energy and Jalen and Darious,” Long explained. “So just after the guys like Troy and all those other guys, I just felt like I wanted to jump in and not miss a step for the defense.”

Johnson’s departure meant a new reliable signal caller would need to be found to relay Morris’ playcalls on the field. Fuller earned the chance at the outset of camp and improved throughout the five weeks, earning the trust of coaches and teammates. And Rapp, who had 15 starts in the previous two seasons, stepped in to become the physical presence that Johnson left behind.

“[Rapp has] taken his game to another level and we have a lot of confidence in him and we’re going to continue pushing that confidence in him because when we do he just — he lights up and he plays amazing,” Ramsey said. “And him and Jordan’s communication and their leadership on the back end can’t be taken for granted.”

Before the opener, Ramsey expressed in simple terms what he expected of himself in his sixth season.

“More. Just more — whatever that may be,” the four-time Pro Bowl selection said. “More.”

Morris grinned when spending 2 minutes 53 seconds running through the characteristics of Ramsey, Williams, Long, Fuller and Rapp. It was obvious that each player is bringing something unique to this season’s edition of the secondary, but it stoked an obvious question.

How does Morris manage all of the personalities?

“That’s kind of our job — manage really good football players and get them to go out there and play really well together,” Morris said. “How do you do that? The million-dollar question. I’m going to keep that to myself so I can remain a really good coach.”

5 bold predictions for Dolphins against Falcons

Alex Caruso says he will miss playing with LeBron James