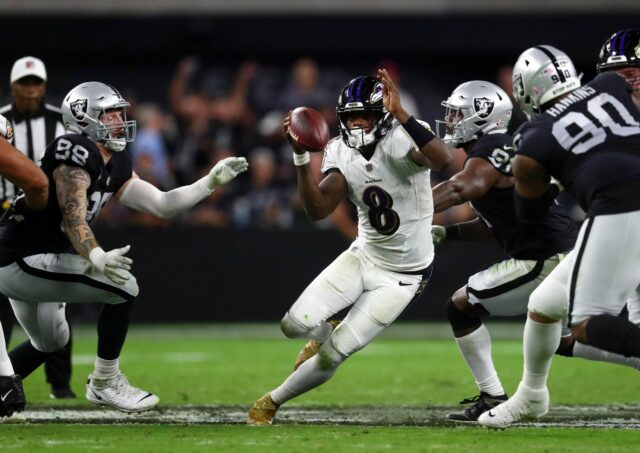 Las Vegas Raiders pass rushers Maxx Crosby and Yannick Ngakoue were not shy about setting high expectations for their pairing in the 2021 NFL season.

They faced their first big test of the year going against an electrifying quarterback in Baltimore Ravens’ star Lamar Jackson. Despite his mobility in and out of the pocket, the Raiders’ pass rush did a stellar job of making him uncomfortable all game.

Crosby led the way with six total tackles, two sacks, and two tackles for loss. His efforts to apply pressure did not go unnoticed by Jackson.

“Maxx, he did a great job,” Jackson said. “I know he wanted to get a sack on me because me and him have mutual friends. They told me about it. I can’t let him get me, but he finally got me. He did a great job. Yannick [Ngakoue] did a great job as well.”

Crosby was not the only one that managed to get to Jackson during the spectacular 33-27 win in overtime. He was sacked three times and pressured on 18 of his 33 drop-backs.

While Crosby’s pair of sacks helped set the pace, the final one in overtime by defensive end Carl Nassib proved to be the most pivotal. The play is indicative of the team’s efforts this offseason to rely on an all-around effort to get the job done, and it clearly paid some dividends.

Of course, the edge-rushing tandem of Crosby and Ngakoue will be tasked with doing the heavy lifting when it comes to applying pressure consistently. Unfortunately, it remains to beset if the latter will be available moving forward after suffering a hamstring injury during the game.

If Ngakoue is forced to miss any time, the onus will fall solely on Crosby to serve as a spark for this group.

What margin of victory do the All Blacks have to win by to completely undermine the USA Rugby bid for a World Cup? : rugbyunion

Springboks will have Erasmus back in camp for European tour