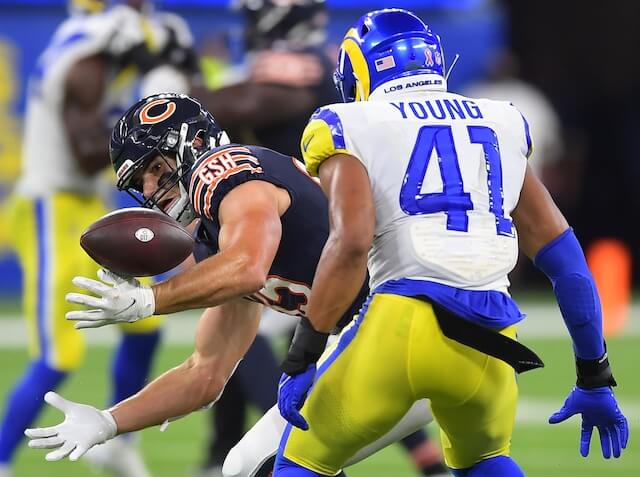 The Los Angeles Rams put together an all-around effort in their dominant 34-14 victory over the Chicago Bears in the 2021 NFL season opener. Among the notable key performances came from linebacker Kenny Young.

The Bears seemingly got off to a hot start after a big opening kickoff return put their offense in prime field position. They followed it up by feeding running back David Montgomery, who picked up 55 yards on just two rushes during the drive.

Fortunately, the Rams’ defense finally managed to pick up where it left off last season as the stingiest group in the league after cornerback David Long Jr. secured a tipped pass from Young in the end zone. The momentum shift was just what they needed to help set the ice for the rest of the game.

Head coach Sean McVay was notably impressed with Young’s performance and credited the strides he made during the offseason.

“Yeah. He did a great job. And that’s what he’s been going back to last year. I thought he picked up where he left off. He’s had a great training camp. He’s done a great job of really kind of demonstrating the versatility that he has, both being able to defend the run but also making timely plays in pass coverage.

“That tip was all him. And then David Long did a great job finishing it. But he’s been flying around. He’s got great athleticism, toughness. And Chris Shula’s done a great job with Kenny (Young) and very pleased for Kenny and want to see him continue to build on this.”

The linebacker corps had been a point of weakness on this otherwise elite defense during the 2020 campaign. While there was plenty of speculation regarding how they would address this group during the offseason, they opted to stick with the personnel at their disposal.

Young’s emergence during training camp is a prime example of why L.A. was so confident that linebackers coach Chris Shula would be able to bring them along. It is now starting to pay some major dividends for them to begin the season with young players like him, linebacker Justin Hollins and cornerback David Long each stepping up against Chicago.

The Rams have another favorable matchup against an Indianapolis Colts team that is coming off a Week 1 loss to the Seattle Seahawks. Young will look to show that he is capable of producing on a weekly basis versus a Colts’ offense that also relies on a balanced attack.

What margin of victory do the All Blacks have to win by to completely undermine the USA Rugby bid for a World Cup? : rugbyunion

Springboks will have Erasmus back in camp for European tour

Whistling Straits: Who can tame this Ryder Cup beast?

From Rivals To Teammates, Team Europe Proves A Force At Laver Cup

HER MAJESTY QUEEN LETIZIA, PRESIDENT OF HONOUR OF THE 2023 SOLHEIM CUP