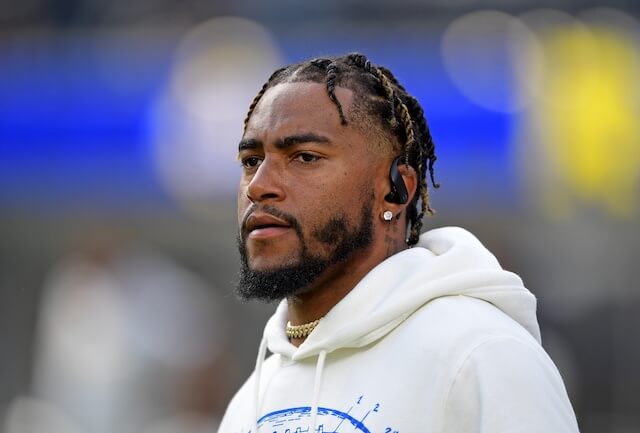 One of the Los Angeles Rams’ biggest strengths so far in the 2021 NFL season has been the depth of their receiving corps.

While Cooper Kupp has arguably been the best receiver in the NFL so far and Robert Woods has remained his steady, productive self, the emergence of Van Jefferson as the No. 3 receiver has been a pleasant surprise.

Because of Jefferson’s production, the Rams’ other receivers like DeSean Jackson and Tutu Atwell have not seen the field nearly as much as they had hoped.

It appears that Jackson is not happy with that as it was reported on Friday that he and the Rams have mutually agreed to find a trade partner ahead of Tuesday’s deadline.

Sean McVay went on to confirm that is the case, adding that Jackson will not suit up for this Sunday’s game against the Houston Texans, via Stu Jackson of TheRams.com:

“We had good conversation this morning, we’re working through some things with him, we are allowing him to be able to look into some options for himself,” McVay said prior to Friday’s practice. “And because of that, we won’t have him, he won’t play this weekend.”

It remains to be seen if the Rams will be able to find a trade partner for Jackson, who has a base salary of $4.15 million with some incentives mixed in.

The hope when the Rams signed Jackson was that he would add a deep threat to their offense. While the addition seemed to be working out well, Jackson has not seen the field a whole lot in recent weeks, which is why he wants a trade.

It’s unclear whether a trade is something the Rams want as well as McVay would not go into detail on the matter:

When by a reporter asked why Jackson wanted this, McVay said he wanted to keep those details “in-house” and “will have more information following up.”

“We’ve kind of talked about it, but I think really, what it boils down to is opportunities that I think he’s deserving of and the situation and some of the circumstances that surround it,” McVay said. “And that’s really all I’m going to talk about with regards to DeSean.”

This situation is unfortunate as Rams fans were enjoying watching Jackson play for his hometown team and had hopes that he would play more when games get more important in the back half of the season.

If the Rams are able to trade Jackson and clear up some cap space then perhaps another move could be on the horizon though, so it will be interesting to see how things play out ahead of Tuesday’s deadline.

Podcast: Is Golf In The Olympics A Success?

The ‘Most passing touchdowns as a rookie’ quiz

Pride 336-3 in their 1st Innings against Scorpions at lunch – NationNews Barbados — nationnews.com

3 goals for Killian Hayes in his return to action

Jared Dudley reveals when he will return to Lakers lineup

Turfheads Take VI: Yes, you have a great story to tell