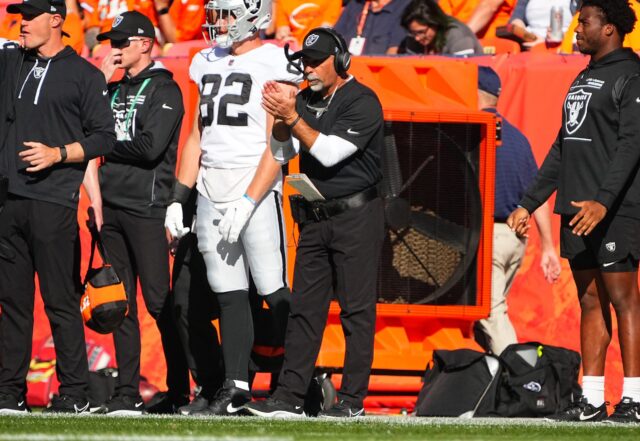 The Las Vegas Raiders have looked as formidable as any team in the AFC through the first seven weeks of the season. Even with the coaching drama and Rich Bisaccia taking over unexpectedly, it appears the Raiders have not lost a beat.

This is especially true on offense, as the 5-2 Raiders rank in the top 10 in total yards per game, passing yards per game, and points per game. Derek Carr has looked the part of a dark horse MVP candidate, while the pass-catching core has taken a step up from all positions.

Bisaccia wouldn’t go as far as to say that this is the best group of pass-catchers he’s seen with the Raiders, but he did have high praise for the group. “Well, it’s certainly a talented group, everyone from the receivers to the tight ends, and then obviously you know what we’ve done with the running backs.”

“Certainly, Josh [Jacobs] and Jalen [Richard] had two big catches in the game,” Bisaccia said, referring to their touchdowns in the win over the Philadelphia Eagles. “Both over there on the boundary, which are tough catches and tough throws. And Kenyan [Drake] has been a good receiver for us, so it is a talented catching group for us.”

“As far as Darren [Waller] being out, it happened kind of so late in the week that I just think Foster [Moreau] has been in that role before and just a couple more balls came his way. But I think they all understand that Derek [Carr] is going to share the ball around according to what he sees from the defense, and it is a talented group and hopefully we can just keep improving.”

The Raiders will have a real chance to contend in the AFC if they can avoid a late-season collapse as they suffered in 2020. Last season, the Raiders started 6-3 before going 2-5 in the final seven weeks to finish 8-8.

This season, they’ll have another big mid-season test to show their true colors as a team. If they beat the New York Giants in Week 9 following their bye, they’ll be 6-2 entering a three-game stretch against the Kansas City Chiefs, Cincinnati Bengals, and Dallas Cowboys.

Bisaccia’s offense will have to do a lot of work to outscore those high-powered scoring units, but they appear ready for the task.

With Waller missing the Raiders win over the Eagles and Jacobs getting hurt early in the contest, Bisaccia is not concerned about either of their long-term health. Both should be back in the lineup next weekend against the Giants.

Lakers not willing to attach pick in Russell Westbrook trade

[VIDEO] SHAWN PORTER REACTS TO MAYWEATHER VS. LOGAN PAUL; EXPLAINS WHY "IT'S GOOD FOR BOXING"

Miller and Bagnaia: Albacete to Jerez, 10 years on