Alex Bolt is joining the Australian line-up for next week’s Davis Cup Finals in Italy. 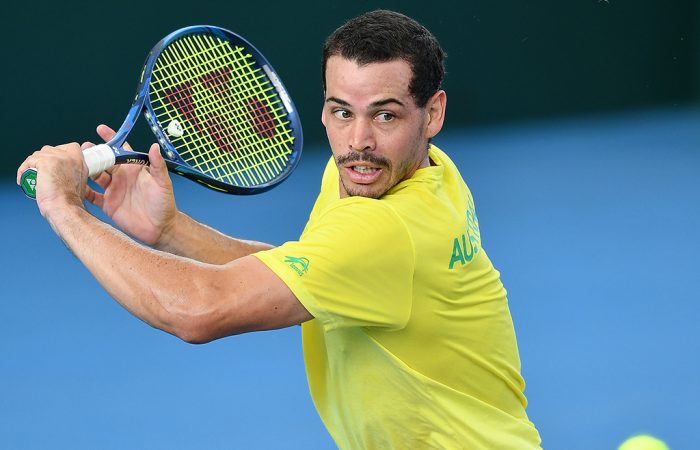 An excited Alex Bolt is joining the Australian team for next week’s Davis Cup Finals in Italy.

The 28-year-old is a late addition to the Aussie line-up, replacing Jordan Thompson who has withdrawn as he is recovering from COVID-19.

“To be honest, I wasn’t really expecting it at all,” Bolt said of his late call-up.

“I was having dinner with my housemates when I saw I had an incoming call from Lleyton Hewitt and I wasn’t really sure what it was going to be about.

“As the phone call unfolded, he asked me if I wanted to be on the team. It’s something that as a young kid, I’ve always wanted to be part of the Davis Cup team and one day represent my country. Anytime I’m offered a spot on the team, I was never going to knock that back.”

It will be the second time Bolt has represented Australia in the Davis Cup competition, having first been selected for a qualifying tie at Adelaide in March 2020.

Bolt is thrilled to now have the opportunity to compete at the Davis Cup Finals.

“To play at the Davis Cup Finals, that’s where you want to be playing for your country,” Bolt said. “The best teams in the world are all there and everyone is fighting for the title.”

Bolt has had a career-best season, scoring five top-100 victories and advancing to the second round at both the Australian Open and Wimbledon. The world No.135 is also set to record his highest-ever year-end rank.

Bolt had recently returned to Australia and was preparing for his preseason.

“I’ve been home in Australia for two weeks now. Just started to refresh the body and mind,” he said.

“Now having to fly back overseas is going to take a little bit of adjustment, but I’d go anywhere for Davis Cup. As soon as I got the call, I was ready to go wherever.”

Rinky Hijikata, a 20-year-old from New South Wales, is the team’s hitting partner. Hijikata has won four ITF singles titles in 2021 and is currently at a career-high ranking of No.367.

Australia is one of 18 nations competing in the Davis Cup by Rakuten Finals, played from 25 November to 5 December.

Round-robin matches are played across Madrid, Turin and Vienna, with Madrid hosting the semifinals and finals.

“Our main focus in on Turin and trying to get through our group stage to give ourselves the opportunity again to go through to the knockout quarterfinals,” said Australian captain Lleyton Hewitt.

Australia, drawn in Group D, faces Croatia and Hungary during the round-robin stage in Turin.

The Nine Network will broadcast the Davis Cup Finals live in Australia.

Steph Curry questionable ahead of Thursday's matchup vs Cavaliers; Andre Iguodala out

Bumps “aren’t an issue” for F1 cars after MotoGP complaints

Is the Dragons’ season over?