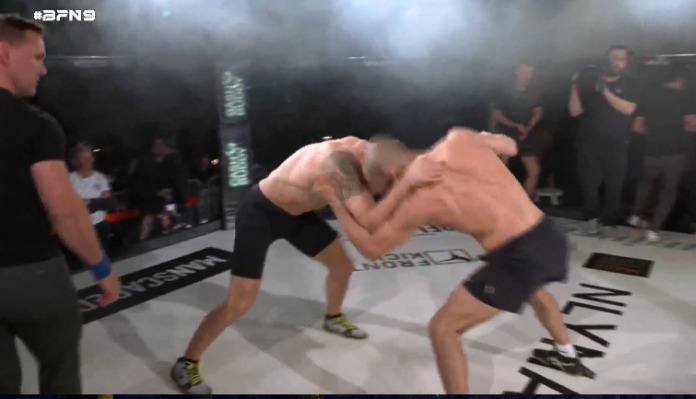 Khamzat Chimaev picked up a win over a top-10 UFC middleweight, but it wasn’t in fighting.

On Friday, Chimaev and Jack Hermansson had a freestyle pay-per-view wrestling match. The two know each other due to both being from the Nordic countries of Europe, so the two UFC fighters decided to have a wrestling match. The match took place at 187lbs but in the end, it was Chimaev winning by points.

Khamzat Chimaev doesn’t APPEAR to have much trouble taking down Jack Hermansson……👀 pic.twitter.com/xfgPNcHvm9

Khamzat Chimaev did have some trouble getting Jack Hermansson down who is known for his wrestling. But, he also stuffed some solid shots from Hermansson, and the Swede got the decision win. After the match, however, a fan stormed the cage and started a scuffle.

A fan breached the octagon after Khamzat Chimaev won the freestyle wrestling match against Jack Hermansson during the Bulldog Fight Night 9 event. pic.twitter.com/jMJAV7me20

Khamzat Chimaev (10-0) is coming off a dominant first-round submission win over Li Jingliang at UFC 267. He is 4-0 inside the Octagon with stoppage wins over Gerald Meerschaert, Rhys McKee, and John Phillips. He’s currently ranked 10th in the welterweight division. The fan-favorite also doesn’t have his next fight booked but has been vocal calling out other fighters like Leon Edwards. He is also rumored to be linked to a fight with Gilbert Burns some time in early next year. But, for now, he obviously remains training as he was jacked for this wrestling match against Hermansson.

Jack Hermansson (22-6) returned to the win column last time out with a decision victory over Edmen Shahbazyan back in May. Prior to that, he suffered a decision loss to Marvin Vettori, a submission win over Kelvin Gastelum, and a knockout loss to Jared Cannonier. Hermansson also holds notable wins over Jacare Souza, David Branch, and Gerald Meerschaert. He’s currently ranked sixth in the middleweight division. Like Chimaev, he is without a fight so he is doing this wrestling match to keep him active.

Are you surprised Khamzat Chimaev beat Jack Hermansson in a wrestling match?