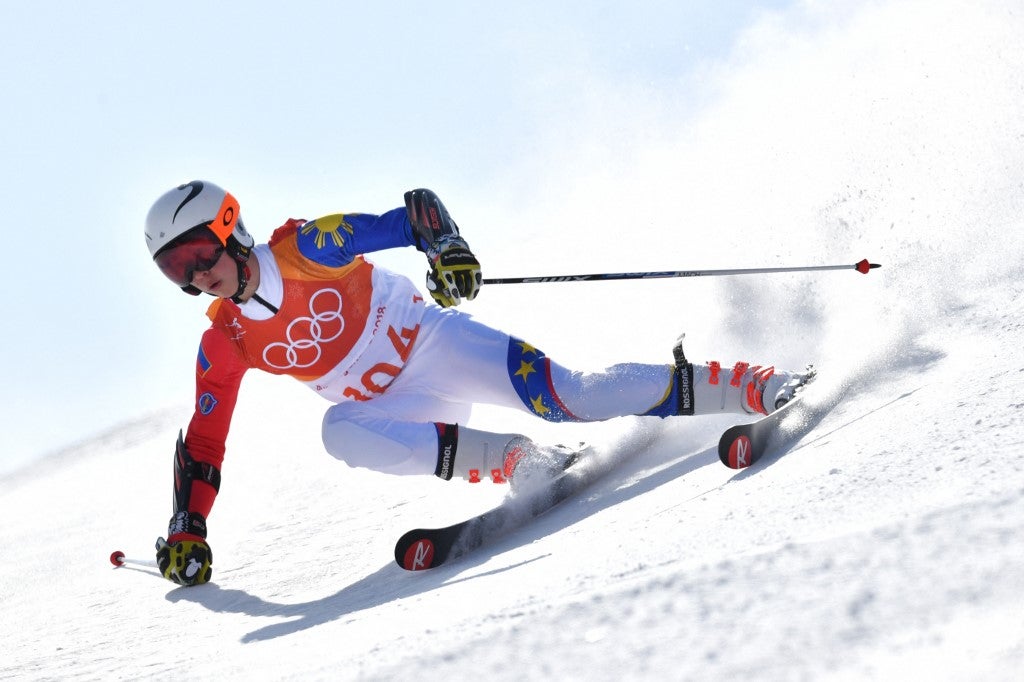 FILE – The Philippines’ Asa Miller competes in the Men’s Giant Slalom at the Jeongseon Alpine Center during the Pyeongchang 2018 Winter Olympic Games in Pyeongchang on February 18, 2018. (Photo by Dimitar DILKOFF / AFP)

The Filipino-American’s continuous maturity lately has become the basis for a second straight trip to the Winter Olympics in Beijing, China from February 4 to 20.

“Ever since he became one of our athletes and he qualified for Pyeongchang (2018 Winter Olympics) and now Beijing, he really progressed well,” said Philippine Ski and Snowboard Federation (PSSF) president Jim Palomar Apelar.

The 21-year-old recently met the minimum qualification standard for another tour of duty in the Winter Games.

Apelar said it won’t be surprising once Miller pulls off a better performance in Beijing after ranking No. 70 in the giant slalom back in 2018.

According to Apelar, the International Skiing Federation (FIS) would make Miller’s qualification official next month after the latter surpassed the threshold of 160 FIS points to qualify for the Winter Olympics.

“Miller currently has 96 points in slalom and 93 points in giant slalom. The lower your score, the better you qualify,” said Apelar.

“He worked very hard in improving himself not only to get by the qualification standard. He is way better now than at the last Olympics,” added Apelar.

Miller, born in Portland, Oregon whose mother Polly Bisquera hails from Santa Cruz, Manila, was chosen by the PSSF over another Filipino-American, Brandon Leitner, a 17-year-old skier who likewise met the threshold required for the Winter Games.

“It will be unfair for Asa if I go for Brandon. Asa has a better score than Brandon,” said Apelar without revealing the score of Leitner.

Miller will join 150 other skiers from across the globe in the Winter Olympics, all of them set to compete in the slalom and giant slalom events.

Apelar said the Philippines secured a slot for its consistent participation in FIS events, including the World Championships and regular FIS tournaments.

He added Filipino skiers annually compete in at least 30 FIS-sanctioned meets worldwide with the world body setting an 18-month qualification window until January.

'We need him' - Saint-Maximin lauds Howe in Steve Bruce comparison

There is a certain irony to the fact that the closest us Irish have come to a WC semi-final was in the 1990s when generally we were shockingly bad : rugbyunion

Is Damontae Kazee the missing piece on defense?