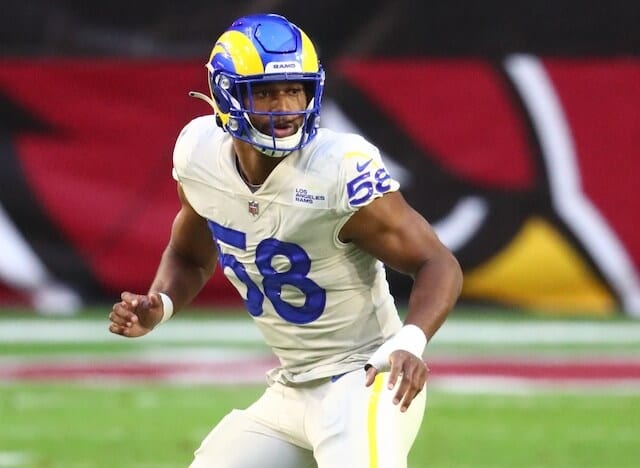 Coming out of their bye, the Los Angeles Rams will look to right the ship and get back in the win column after a pair of disappointing losses.

The Rams have seen a few changes to the roster in recent weeks after adding Von Miller and Odell Beckham Jr., but lost a critical piece in Robert Woods. Miller and Beckham made their Los Angeles debuts in Week 10 against the San Francisco 49ers and will look to integrate themselves more in Week 12 in a pivotal matchup against the Green Bay Packers on the road.

Miller started the game against the 49ers opposite of Leonard Floyd but it appears the linebacker room is going to get some much-needed depth as Justin Hollins nears his return, according to Stu Jackson of TheRams.com:

Meanwhile, the Rams are a week away from starting the window to activate outside linebacker ﻿Justin Hollins﻿ off of Injured Reserve. Hollins has been on IR since Sept. 28 with a pec injury.

Hollins was named one of the starting outside linebackers to begin the 2021 season after his impressive training camp and looked good in his first three games before getting hurt. Hollins recorded two sacks and a tackle for loss and showed some effectiveness in the run game.

The linebacker was projected to miss about eight to 10 weeks with the pec injury he sustained, so this recent news puts him right on schedule to return for the stretch run. Miller himself has been dealing with an ankle injury, so it stands to reason that he and Hollins will be mixed in in order to keep both players fresh.

Hopefully by the time Hollins makes his return the Rams have solved their woes on the field and resemble the team that started out the year so hot.

What happened to David Lee?

‘Not my turn’ to receive covid vaccine – Vettel