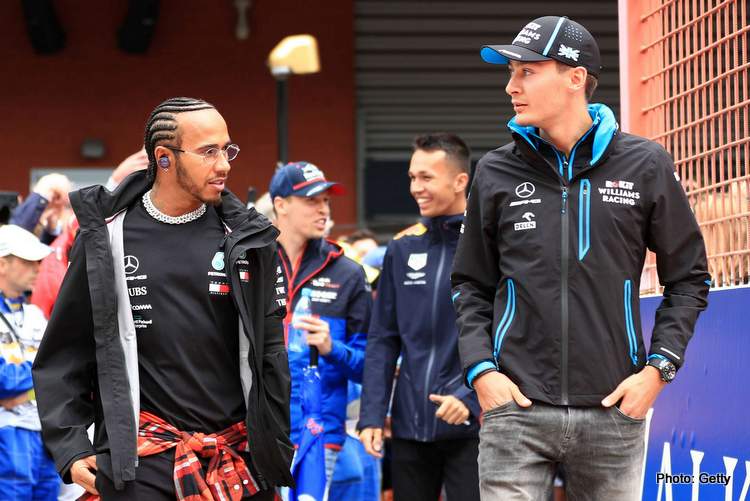 Next year George Russell replaces Valtteri Bottas at Mercedes, getting the most coveted seat in Formula 1 as teammate to Lewis Hamilton, who is expecting a stern challenge from the younger driver.

While 36-year-old Hamilton represents the fast fading Old Guard of F1 while 23-year-old Russell is very much expected to be a star of the future who, in a sense, is mirroring Hamilton’s own career in F1.

Russell is arriving in a team to partner and take on multiple World Champion Hamilton much like Lewis did when he was teamed up with Alonso in 2007; their feud is well told and blockbuster stuff at the time.

The difference is that Russell is no rookie as Hamilton was then, he is wise to the politics and has shown leadership qualities since he arrived on the grid since his debut at the 2019 Australian Grand Prix. He also enjoyed a famous Sakhir Grand Prix weekend last year, a race he might have won had Mercedes not dropped the ball that night in Bahrain.

In other words, Russell is very well prepped for his first season with the World Champions, and Hamilton knows it.

In an extensive interview with Auto Motor und Sport, the seven-time F1 World Champion said of his 2022 Mercedes teammate: “As you know, George is a very respectful person. He is super talented and there is already a lot of mutual respect. He will certainly be quick and will want to win.”

“I remember saying before the duel with Alonso that I wanted to beat him right in the first race. I expect George to feel the same and approach it with the same attitude, otherwise, he wouldn’t be a winner.

“I am in a different position now in my career and I really wish him success. There will come a point when I will stop racing. As my teammate, he’ll be the next British driver I want to see win the World Championship.

“We will of course compete against one another and I want to win the duel, but I hope that I can also have a positive influence on how he develops in the team. For example, when it comes to spending time with the engineers, how he works his way through the data or how he drives on the track.”

There is a 13-year difference between Hamilton and Russell, the younger of the two has 58 Grand Prix starts on his CV, the ‘Old Guy’ has 102 F1 victories to his name.

The new generation just goes beyond the limits, they go too far off-track and just come back on again

“I’ve raced against drivers who sis not always show their true colours. Of course, I don’t know if that’s the case here. I am now 36-years-old and have been doing this for so long. It’s not the first time I’ve faced a driver who is good and bad in some ways.

“But now I feel much better equipped to deal with this situation. I know George is a super-fast driver. And he will definitely get faster and faster, the more mature over time. There is no doubt about that.

“When I look back at myself at the age of 24 or 25 – what I made mistakes at the time – I had the speed in the car, but I had a lot of different experiences outside when I was suddenly in the spotlight. I didn’t do much right then. That’s why I won’t hold something like that against anyone else.”

Hamilton’s generation of drivers are mostly retired now or racing other disciplines, only Fernando Alonso and Kimi Raikkonen have been on the F1 grid longer than Hamilton; The Spaniard back from a two-year sabbatical and The Iceman calling it quits after the season finale in Abu Dhabi.

If after ten years I can still inspire 2,000 people, then I really have to be in the right place

Hamilton has a message for the next-gen: “I want to tell the young drivers that the race tracks they grew up on all had large run-off areas. When I started racing, that wasn’t the case. That was more fun back then, but it was also riskier. You had to drive in such a way that you didn’t go over the limit.

“The new generation just goes beyond the limits, they go too far off-track and just come back on again. They don’t have to fear any consequences. We also know that we have more drivers from rich backgrounds today than ever before.

“This is nothing new. But they are super ambitious. It’s a very decent generation of drivers who are striving to make it at the top.”

While some predicted Hamilton might quit at the end of this season, the reality is the feud with Max Verstappen has only fired him up and a new multi-year deal was inked.

And Sir Lewis has no regrets: “Races like Brazil [2021] are confirmation it was the correct decision. I’ve been working with the team for ten years now. One of my colleagues sent me a message saying I had inspired 2,000 people with victory.

“I replied: If after ten years I can still inspire 2,000 people, then I really have to be in the right place and deserve this place. That makes you feel good,” explained Hamilton, who trails Verstappen by eight points with two races remaining; next up the first Saudi Arabian Grand Prix at the Jeddah Corniche Circuit.

WWE Lets Another Name Go From The Company

Will Leighton Vander Esch return to the Dallas Cowboys in 2022?