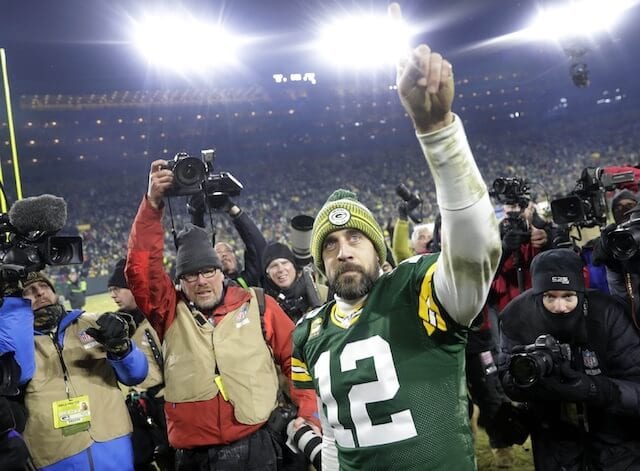 Coming off their bye week, the Los Angeles Rams will look to get back in the win column when they hit the road to take on another NFC contender in the Green Bay Packers.

The Packers are coming off their own letdown after losing to the Minnesota Vikings in Week 11, so they will be looking to get right against a Rams team that suddenly has more questions than answers after their hot start to the 2021 season.

With more practice time under his belt, Odell Beckham Jr. could have a big day against a Packers team that might feel slighted he picked the Rams over them. The loss of Robert Woods can not be understated given how much he meant to the offense, though Beckham could fill the void in other ways as he is a master route runner at all three levels of the field.

Cooper Kupp will serve as Matthew Stafford’s favorite target against what has been a stingy Green Bay pass defense, but Beckham has the opportunity to show that head coach Sean McVay and his offense will be just fine going forward.

Speaking of Stafford, the quarterback has been prone to a few poor decisions, so he will need to be smart when throwing the football. At this point, teams know that Stafford is looking to throw downfield, so it would be wise for him to take what’s available underneath. As far as running the ball goes, Darrell Henderson should receive more than the five rush attempts he got in Week 10 against the San Francisco 49ers.

Presumably, Los Angeles will not be playing from a two-score deficit in the first quarter, which should give Henderson opportunities to gash a Green Bay defense that has been susceptible to running backs.

Aaron Rodgers may be dealing with a toe injury, but he is going to play which means the Rams defense will need to be at its peak in order to slow down the Packers’ potent offense. Rodgers and Davante Adams remain the best quarterback-receiver duo in the game, which means Los Angeles could turn toward Jalen Ramsey to shadow Adams.

Ramsey has largely played in the ‘Star’ position this season in order to play closer to the line of scrimmage, though slowing down Adams could be the key to limiting Green Bay from scoring.

The Packers are also getting Aaron Jones back despite a questionable tag after dealing with a knee injury. In Jones’ absence, his replacement AJ Dillon has been productive in the lead role so he should still get his fair share of touches.

Unlike Jones, Dillon is more of a power back who will look to churn for extra yards after contact, which could spell trouble for the Rams, who have been noticeably soft up front.

Packers head coach Matt LaFleur knows McVay’s offense well and utilizes the same kind of pre-snap motion and play-action passing schemes, so it will be interesting to see how defensive coordinator Raheem Morris gameplans against such a similar offense.

Like Beckham, Von Miller also got to use the bye week to get healthy and learn the playbook more and he should be heavily involved throughout the day. Miller looked solid in his debut, but Los Angeles will need more out of him in order to pull out a win.

In their loss against the 49ers, the Rams’ offense barely saw the field in the first half as San Francisco was content to move the chains and drain the play clock. Los Angeles likes to strike early and often, but this time around it would be in their best interest to try and keep Rodgers off the field for as long as possible. McVay and Stafford should look to emulate the 49er game plan and take the easy yards versus the explosive plays each drive.

2. Win in the trenches

The narrative is out there that L.A. struggles when met with physicality up front, so they will need to dig down and show they can win the battles at the line of scrimmage. The offensive line has done a good job of protecting Stafford, but they will need to play with an edge when it comes to opening holes for the ground game.

On the other side, Aaron Donald, Leonard Floyd and Miller will need to set the tone and get after a Packers offensive line that is missing several starters. Should they be able to get pressure on Rodgers, then the defense and team as a whole will be set up for a major bounce back.

For the first time ever, the Premiership final will be shown live on terrestrial television! : rugbyunion