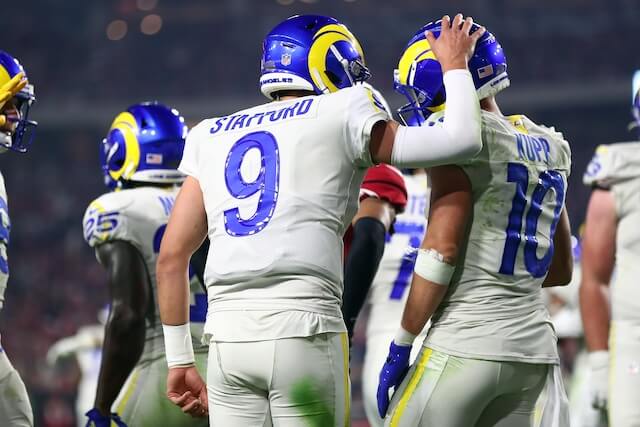 The Los Angeles Rams have taken a lot of criticism in recent weeks, from myself included, for their poor play and inability to beat quality opponents.

Well, they went out in Week 14 and shut all of us up by earning a convincing 30-23 victory over the first-place Arizona Cardinals on the road on Monday Night Football.

With the win, the Rams are now back in the mix to win the NFC West at 9-4, just one game behind the Cardinals, who fell to 10-3 with the loss. Also, Sean McVay now improves to 9-1 against the Cardinals in his five seasons with the Rams with the only loss coming earlier this season.

There was a lot to break down with this win, so let me just get right into it…

I can’t remember an NFL team that faced as much adversity as the Rams did leading up to this game (yes, I know that’s probably hyperbole). But whether it be the criticism they’ve received in recent weeks, the injuries that have happened in the last week or having five key players placed on the Reserve/COVID-19 list just before the game, the Rams had every excuse to lose this one.

The last part of that was obviously the most important as the Rams found out the day before the game that they would be without starting running back Darrell Henderson, starting right tackle Rob Havenstein and cornerback Dont’e Deayon due to positive coronavirus (COVID-19) tests. That was on top of both center Brian Allen and cornerback Robert Rochell already being ruled out of the game due to injury.

Then, just before kickoff, the Rams found out they would also be without star cornerback Jalen Ramsey and starting tight end Tyler Higbee as well, so they were extremely short-handed in this one.

The Ramsey loss loomed large considering how good Arizona’s wide receiving corps is. Ramsey has done great work on DeAndre Hopkins in the past but without him, it was unclear how the Rams’ secondary would fare against Kyler Murray and the Cardinals’ high-powered offense.

It was a team effort, but the Rams responded in a big way to earn a quality victory and they deserve a ton of credit for that. I thought this could be a season-defining game for L.A. one way or the other, and after this big win under the circumstances, they are now firmly back in Super Bowl contention.

For the Rams to come away with a win against a quality opponent without many key players, their star players had to play like stars and that is exactly what happened.

Aaron Donald, who is the Rams’ biggest star, came out and set the tone from the very first play of the game:

AARON DONALD IS A FREAKpic.twitter.com/aCQgUKRSuD

Donald had his best game of the season for L.A., finishing with three sacks and an incredible 15 quarterback pressures. For the Rams to beat the Cardinals, they knew they had to get pressure on Murray, and that’s exactly what Donald led the way in doing.

Then on the offensive side of the ball, the Rams’ two stars — Matthew Stafford and Cooper Kupp — were absolutely brilliant.

Stafford has taken a lot of criticism in recent weeks for his poor play, and he responded with arguably the best game of his career. Stafford was throwing dimes all night, completing 23-of-30 passes for 287 yards and three touchdowns, finishing with a 139.2 quarterback rating.

And the most important part of it all? He didn’t turn the ball over. The Rams won the turnover battle 2-0 in this one, and it’s no surprise that a win came from that.

As far as Kupp goes, I’m running out of words for him because he has been simply incredible all year and that was against the case in this one. He had 13 receptions for 123 yards and a touchdown, which gives him 113 receptions for 1,489 yards and 12 touchdowns in 13 games, all of which lead the league.

Sony Michel is a difference maker

Part of what made the offense click though is the running game. Without Henderson, it was Michel’s load to carry again and he turned in a solid, albeit not spectacular performance with 20 carries for 79 yards.

It will be interesting to see how McVay handles the backfield when Henderson returns, but to me, Michel should remain the lead guy. He’s a bruiser, the type of runner that will wear defenses down throughout the game.

Henderson, on the other hand, is a change-of-pace, home run hitter type of back. I think he would be perfect as a complement for Michel on third down and hurry-up situations.

New players getting comfortable in roles

These guys probably should’ve been included in the “stars playing like stars” section, but I decided to give them their own because I was so impressed last night.

When the Rams acquired both Von Miller and Odell Beckham Jr., it was known that it would take a few weeks to get them up to speed. So for me personally, when they weren’t lighting the world on fire in their first couple games with the Rams, I was not concerned.

Last night was a sneak peek of what is to come for both players though as both now look comfortable with the team and made a huge difference.

Beckham caught his third touchdown in as many games, finishing with six receptions for 77 yards. It’s clear that he and Stafford and becoming more and more comfortable together, which gives the Rams another big receiving threat in addition to Kupp and Van Jefferson.

Beckham recorded his fastest speed since before his ACL surgery in the win over the Cardinals, showing that he is healthy and ready to roll for the last month of the season.

And although Miller is still searching for his first sack as a Ram, he was everywhere last night. Miller finished with four tackles in the game, including a tackle for loss.

For the Rams defense to be dominant, it has to start up front, and they now have one of the most dangerous defensive fronts in recent memory with Donald, Miller, Leonard Floyd and Justin Hollins.

Up next for the Rams…

The Rams now return home to host the Seattle Seahawks in Week 15, which should be a close game, as is always the case when these two NFC West teams square off.

By Tuesday afternoon though, the Rams placed a total of 15 players on the Reserve/COVID-19 list so they may be looking at another short-handed game, which is hardly ideal when wins are must-have this late in the season.

Pep says Man City were only 'good' in seven-goal win; sympathy for Leeds

“Wassup THEN!? You TOO SOFT!” Trash Talkers Were Playing ROUGH So We Took It PERSONAL!

What will Seth Rollins have in store for WWE Champion Big E this Monday?

Maxx Crosby Has Been ‘Unblockable’ During Training Camp