Derek Carr Won’t ‘Watch Anything’ Ahead Of Clash With Chargers 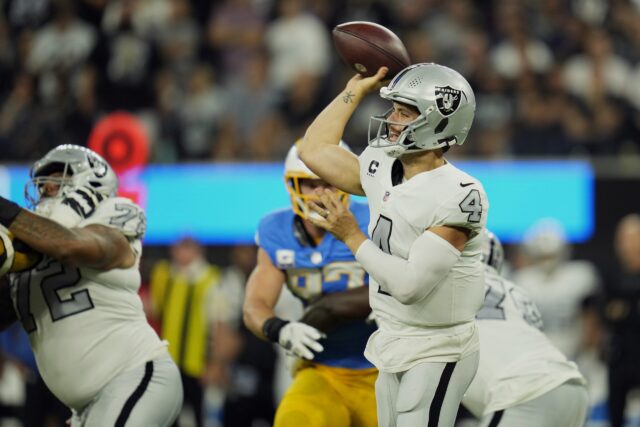 The Las Vegas Raiders head into this weekend’s showdown with the division-rival Los Angeles Chargers with the season on the line. All the Raiders need to do is secure a win over Justin Herbert and company, and they’ll officially be playoff-bound for only the second time in Derek Carr’s career as the team’s starting quarterback.

With a win-and-in scenario in play, Carr is concentrating on getting the best of this Chargers team that dominated them earlier in the season. However, another scenario could clinch a spot for Las Vegas, which Carr will completely ignore ahead of Sunday’s game.

“Hopefully I speak for everyone, but for me, I’m not even going to watch anything,” Carr said. “I hope the TVs are all off. I hope no one’s watching, and I hope our complete focus is on winning the football game. And if we can keep it to that and someone comes up to me and says, ‘Hey, we’re in,’ Oh, OK, great. I still want to go out there and still want to beat the Chargers.”

If the Indianapolis Colts and Pittsburgh Steelers lose on Sunday, two teams that will play before the Raiders take on the Chargers; then Las Vegas will secure a spot in the postseason. However, that scenario is unlikely with the Colts heavily favored against the lowly Jacksonville Jaguars and the Steelers taking on the Lamar Jackson-less Baltimore Ravens.

Although it’s a stretch that the Raiders could be playoff-bound before taking on the Chargers on Sunday, anything can happen in the NFL, and Carr is fully aware of that fact.

Still, he’d much rather avenge the loss to the Chargers earlier in the season and put an end to Joey Bosa’s criticism to punch their ticket to the postseason.