Aleksandar Vukic headlines a strong day for Australians at the Adelaide International 2, overcoming Alexander Bublik for his first top-50 victory. 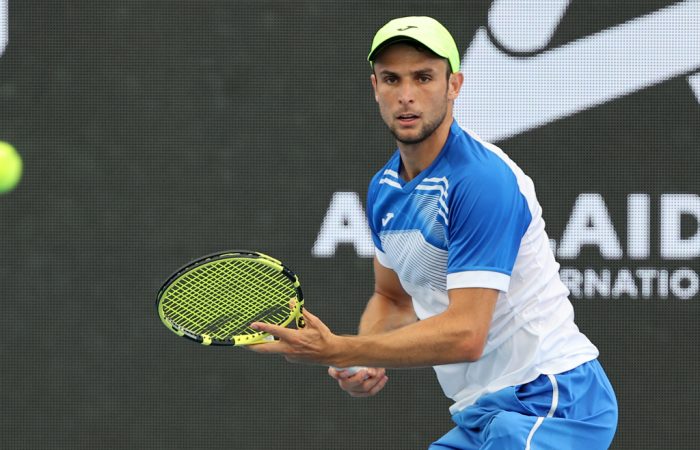 Alexandar Vukic has recorded a career-best win to headline a positive day for Australian players at the Adelaide International 2 tournament.

It followed exactly a week after his gallant loss to American veteran Steve Johnson at the same venue.

The 25-year-old Sydneysider did not face a break point for the match and generated seven of his own, winning 79 per cent of points on his first serve.

“He’s a very tricky opponent. He can throw anything at you. He can throw a 120-kilometre-per-hour serve or 240, or underarm serve for that matter and he mixes up play very well. He tries to throw you off rhythm.” Vukic related.

Taking plenty of positives out of last week’s loss to Steve Johnson, Vukic was confident he wasn’t far from his best form.

“After the first set I actually thought I played well. That could have gone either way, that match,” he said of the tight loss to Johnson.

“I thought it was really important not to be too down on myself because I have done that in the past. If I play at a decent level, like I did that day, and like I did today, good things can happen.

“So I just tried to stay positive.”

Storm Sanders backed up yesterday’s doubles victory with a strong performance in qualifying.

The Australian defeated Belgian veteran Kirsten Flipkens 6-3 6-4 to secure her place in the main draw.

Sanders had gone down a week earlier in a terrific contest against eventual finalist Elena Rybakina, so was confident with her form.

“I played a really good match against her,” said Sanders. “My game style is that I’m a very aggressive player and I like to take time away.

“When I’m doing that really well, I’m good enough to beat anyone. I think for me it’s just trying to be able to consistently do that.

“I might get a look at playing a top 20, top 30 player first round, which would be awesome because I love competing against them and testing my level.

“I think I’m at that stage where I’ve had a lot of matches against high-quality opponents and I’m starting to believe I can win those matches as well.”

Sanders, who triumphed in doubles with Ash Barty, related how playing well in one format helps her progress in the other.

“Last week we played tough matches. To kind of come through that gives me confidence on the singles court as well.”

Earlier in the day, Daria Saville exited in the first round, with Croatia’s Ana Konjuh claiming a 6-2 7-6(4) win.

Ricky’s picks for Day 2 at the French Open Tennis, including Rafa Nadal vs. Thompson

Liverpool vs Chelsea: Defences could dominate in Anfield showdown

Dallas Cowboys must now go out and hire their mercenary

Vanessa Demopoulos: ‘It’s been nice being a retired stripper’ ahead of third UFC bout