Claiming seven wins in eight matches in a blistering start to the season, Thanasi Kokkinakis is superbly positioned to lift a first ATP trophy in his hometown. 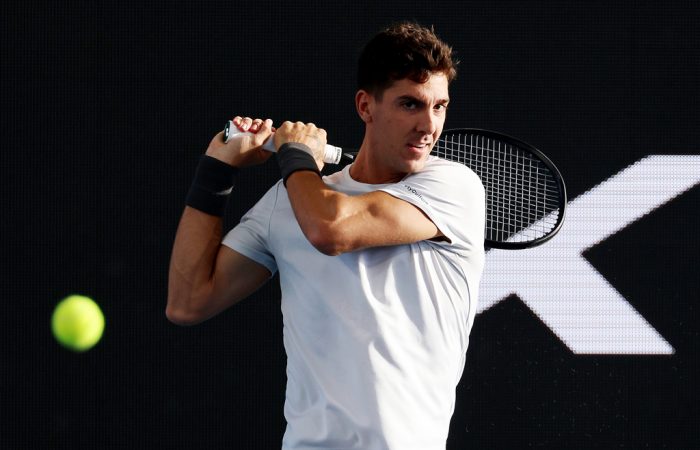 A bright future has long been a natural talking point surrounding the vastly talented Thanasi Kokkinakis.

But with a career-best season start at the Adelaide International, the hometown hero is focused firmly on the now.

Buoyed by a semifinal appearance at last week’s season-opener in the South Australian capital, Kokkinakis is delighted to progress one match further at this week’s event.

The 25-year-old has done so in spectacular fashion, claiming three-set wins over No.2 seed John Isner, countryman Aleksandar Vukic and former US Open champion Marin Cilic.

“I couldn’t ask for anything more, beating quality players last week and this week. Proud of my consistency. Proud of my mental effort. Yeah, I’m stoked,” said Kokkinakis, who has seven wins in the eight matches he’s contested this year.

Saving two match points in the two-hour, 39-minute thriller against Cilic, Kokkinakis underlined the resilience that’s also helped him recover from numerous injuries throughout his career.

“To come out and play good matches, back it up, that’s the biggest thing. That was the question mark with me,” Kokkinakis admitted.

“I think people knew I could play the odd good match, but to do it consistently and back it up. Yeah, it’s great. It’s obviously set me up for a real good position in the year.”

Having toyed with whether he would even compete in the second Adelaide tournament (“I can’t pass up an opportunity to play another tour event in my hometown,” Kokkinakis eventually decided), the South Australian now finds himself superbly positioned to lift an ATP trophy for the first time.

Standing in his way is Arthur Rinderknech, a world No.58 Frenchman who has progressed to a first ATP final with wins over Mackenzie McDonald, Soon-woo Kwon, Karen Khachanov (the No.3 seed) and Corentin Moutet this week.

Kokkinakis expects Rinderknech to challenge with some big weapons in their first professional match.

“(He’s a) little bit of a throwback player. Likes to get in (to the net). Great serve. He’s been playing well. I think these quick conditions suit him,” he said of the 26-year-old.

But confidence is steadily returning for Kokkinakis, who concedes he contemplated quitting pro tennis during some earlier health struggles in his career.

“I’ve always had the inner belief and inner confidence. Sometimes I’ve lost it. As I said, that’s when I was contemplating stopping for a while,” he said.

“I always kind of look back on good wins and good moments that I had to try and kind of push me to keep going, keep trying to bring my best level.

“I think the biggest thing for my confidence is just being able to back up and do it match after match. That’s something that I haven’t proven in a long time.”

Competing for a first ATP title in his hometown provides Kokkinakis with an extra boost. As a child, the South Australian forged dreams of his own professional career while watching pros including Jo-Wilfried Tsonga compete at The Drive.

“You always think, ‘Oh, it would be cool to win a title’. You never think, ‘I’m going to win a title. You’re like, I hope to play this tournament one year’,” he said.

“To find myself in this position, beating a former Grand Slam champ, players like I’ve beaten, yeah, I’m stoked.”

But with an opportunity to join some of those superstars on an ATP honour roll, Kokkinakis is not looking too far ahead.

“It would be massive. It’s not the be-all, end-all. There’s a lot of great players that have never won a title. For sure I’m thinking about it,” he said of a potential title breakthrough.

“It would be huge. I’m just going to enjoy it and see how it goes.”

There was actual tennis, but Djokovic still the story

‘I want people to realise’

The ghastly spectacle of Evander Holyfield vs Vitor Belfort