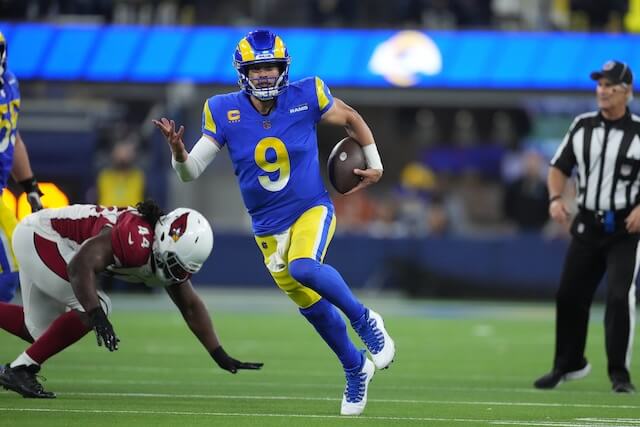 The Los Angeles Rams opened up the postseason in dominant fashion on Monday night, cruising to a 34-11 victory over the Arizona Cardinals to advance to the next round.

While the win was just the first step in what the Rams hope will be a Super Bowl run, it did carry extra significance as it marked Matthew Stafford’s first postseason victory in his 13-year NFL career.

After the game though, Stafford downplayed the significance of getting that first playoff win.

“I think it means a lot more to you guys and all that. I just want to be a part of this team and help us win. I trust in myself, trust in my abilities, trust in my teammates. I’ll go out there and play and let the chips fall where they may.”

The story of this game wasn’t really about Stafford, although he was nearly perfect completing 13-of-17 passes for 202 yards and three total touchdowns. The game was mainly won by the Rams’ defense though as that group was dominant, while the special teams was also great and the run game on offense led the way.

Stafford made sure to give his teammates credit for the performance.

“Yeah, I mean, I’m just excited for our team to get the win. Obviously, what a team effort. I mean, our defense played outstanding tonight. Special teams basically set up a score with (P) Johnny (Hekker) pinning them down there. Did a great job on field goals. We were good enough on offense to score some points and come away with a win. Just happy to be moving on.”

Even though it was far from Stafford’s best game, he felt like he made the necessary plays to help his team win.

“You know, I felt like I was putting the ball in the right place for the majority of the night. I had to throw one away towards (WR) Coop(er) (Kupp) one time. But other than that, I felt like the ball was going to the right place in a pretty good spot. Our guys made great plays. That’s how I expect to go out and play every game. It doesn’t always happen that way. But just felt good out there, felt comfortable and our team played great.”

With the Rams jumping out to a big lead early, Stafford did not have to do a whole lot to secure the victory, which is why he only had 17 pass attempts.

It’s unlikely the Rams will be able to do the same thing against the Tampa Bay Buccaneers next week though, so look for Stafford to do more work through the air in that game.

Matthew Stafford Not Expected To Throw Until Closer To Training Camp

WATCH: QDK's ridiculous leg-side stumping that got the stamp of approval from world's best

Every single time Rahul Dravid screamed, he would say, ‘Why am I doing this?’

Formula 1 extends its partnership with QuintEvents