Taylah Preston, Zara Larke and Edward Winter have made strong starts in the Australian Open girls’ and boy’s singles events. 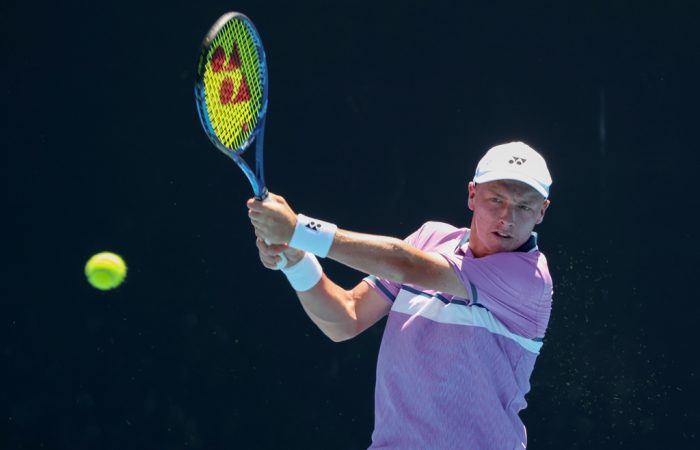 Young Australians Taylah Preston, Zara Larke and Edward Winter have continued their strong starts to the year by advancing to the second round of Australian Open 2022 junior tournaments.

Preston, named Junior Female Athlete of the Year at the Australian Tennis Awards in 2021, kickstarted her new season in style, overpowering Patricija Paukstyte from the first point to the last.

The Western Australian breezed through her first-round match, claiming a 6-2 6-1 victory over the Lithuanian in less than an hour.

She struck 14 winners to six, and won 63 total points to 40, with five breaks of serve in an overall dominant display.

Preston earlier competed in Australian Open main draw qualifying and the 16-year-old feels that experience has set her up nicely for the year ahead.

“Playing against some older and better players I think helped me a lot in preparing for the Traralgon tournament and this one as well,” Preston said.

With a plan this year to “get my ranking up so I can play all of the junior slams”, Preston also takes confidence from her success at the Australian Tennis Awards.

“It was a big honour to win that award, especially given some of the previous winners like Ash Barty, she commented.

“I hope I can go on to do similar things in my career.”

Larke had chances to break in nearly every game of the first set, creating nine chances in all and converting twice as she always looked on top throughout.

She would keep the foot down in the second set, capitalising on 13 unforced errors from Svendsen to break serve three more times as she ran away with the victory.

“I was able to keep composed when I couldn’t get those breaks at the start. So that was good,” said 16-year-old Larke.

“In the first set my back was struggling when I was returning, so I stood back and freed up a little bit.”

In one of the matches of the day in the girls’ event, Australia’s Yilin Yan fell in three sets to Lola Radivojevic of Serbia

Yan was up a break in the third set, before going down a break and getting to 0-40 when Radivojevic served for the match, before the Serbian dug her way out to hold for a 4-6 6-3 6-4 win.

Winter came from a set down, landing a crucial break of serve in the eighth game of the second set to swing the momentum his way.

With both players starting to fatigue in the sweltering Melbourne heat, there would be 14 break point chances presented in the deciding set, with Winter getting the edge with three breaks to one as he sealed the deal 6-3 in the third.

Winter had defeated former world No.6 Gilles Simon in the opening round of qualifying for the main draw, setting the 17-year-old set for big things in 2022.

Amor Jasika had a more difficult day in the boys’ event, exiting in straights to Hong Kong’s Coleman Wong, while Canada’s Jaden Weekes claimed a 7-5 7-6 (4) victory over Cooper Errey.

Errey broke back when Weekes was serving for the match in the second to force a tiebreak but couldn’t capitalize on a 3-0 lead in that breaker.

‘He’s so ready for Test rugby’: the remarkable rise of Marcus Smith | Harlequins