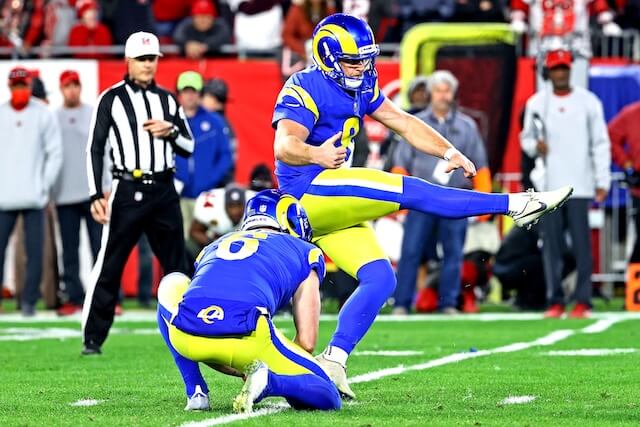 The Los Angeles Rams thrilling divisional round win over the Tampa Bay Buccaneers was filled with a number of unexpected moments. Among those moments included a strange missed field goal by Pro Bowl kicker Matt Gay.

Gay has been one of the NFL’s best kickers this season, missing just two field goals in 34 attempts during the regular season. And while all kickers eventually miss, it was shocking to see a player of his caliber miss several yards short despite it being a 47-yard kick.

The Rams kicker was surprised to see himself miss in that fashion after being nearly automatic all season long, according to Stu Jackson of TheRams.com:

“A little puzzled,” Gay said during a video conference Monday. “Came off the sideline on that one, just kind of sit there for a second, then had some teammates come up and say, ‘Hey, we’re going to need you.’ Our (long)snapper, (Matthew) Orzech, kind of came to me and said, ‘Hey, it’s going to come down to you.’”

A make from 47 — well within Gay’s range — would have given the Rams a 30-13 lead with just over six minutes left. Instead, the Buccaneers were able to tie things up at 27 before a miracle final drive set up a redemption kick for Gay to give the Rams the win, just as Orzech predicted.

Gay credited Matthew Stafford, Cooper Kupp, and his Rams teammates for having faith in him and putting him in a position to put L.A. up 30-27 in the final seconds:

“We got guys on our team that can make plays, so you know that you’re confident in their ability to get you down there,” Gay said. “And just kind of walking down the sideline, it’s, ‘Hey, give me down there.’ It wasn’t a long drive, there’s two – I mean, Staff to Coop, Staff to Coop! And they get us in position, they did a great job handling the clock and getting down there and clocking it. Unbelievable play by those those guys. I can’t say enough about them.’”

The Rams had no plans to lose faith in their kicker after just one miss after the incredible season he’s had. And that faith paid off in the form of a ticket to the NFC Championship Game.

Gay can now move on from that kick without any lingering issues, as it likely would have been a dwelling point had the Rams ultimately lost. Instead, Gay can review the tape to figure out what went wrong ahead of Sunday’s NFC West rematch at SoFi Stadium.

Other than Gay’s missed kick, the Rams also saw a bad snap from their trusted center, a fumble from All-Pro Kupp, and two fumbles from Cam Akers. Following the game, Sean McVay reiterated his faith in Akers and the learning opportunity he can take from the two fumbles.

“[We] always talk about that, to be able to have that great ball security, especially when you’re in those four-minute situations where you’re really just trying to run the clock out. Still, we needed to compete and wanted to be able to do that, he was making a tough run, as he was pulling through it, it got a little away from him, and this defense does an outstanding job attacking at the football – great learning [opportunity], and I know he’ll learn and he’ll respond the right way from it.”

Max Verstappen standing next to a Porsche : formula1

Scammers allegedly stole $500,000 from The Landings in Florida

Standouts impress at the Rivals Combine Series in Indianapolis

Damian Priest Out of Action With Back Injury