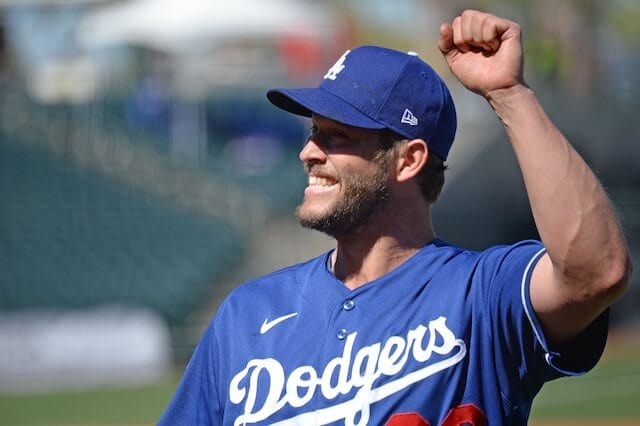 The two grew up playing sports together in the Dallas area. Kershaw has attended Stafford’s games in the past, and the quarterback returned the favor this past September when he was on hand for left-hander’s return start against the Arizona Diamondbacks at Dodger Stadium.

Kershaw now plans to attend Super Bowl LVI at SoFi Stadium this Sunday to support Stafford in the biggest game of his career. “I am. I’m going to go. I’m excited about it,” Kershaw said on the Dan Patrick Show.

With Super Bowl tickets selling for astronomical prices on secondary marketplaces, Kershaw revealed that he purchased his seats through the Rams and will be sitting in the lower level rather than a suite. “I wasn’t too picky for the Super Bowl. I was just like, get in the game, but I’m a seat guy this time. I’m going to be in the seats,” Kershaw said.

“I was like, ‘Matthew, are you busy this week? I know we text like once every two months, but if you can get me a few tickets.’ I actually went through the Rams and bought some tickets. I’m excited.”

Kershaw knew Stafford was destined to play in the NFL at an early age. “Basically as soon as we started playing football. Around here in Texas, we do six-man football in fourth grade, and he was throwing the ball further than everybody else,” Kershaw said.

“And we actually did track meets in elementary school, and instead of the shot put, we did the softball throw. The softball throw, he just dominated that too. He’s always had a great arm. He actually is pretty smart, too, so he figured out the whole football thing.”

Stafford, now in his 13th NFL season, has always been one of the better players at his position, but a Super Bowl title has evaded him thus far. Kershaw can relate as he didn’t capture his first World Series championship in 2020, which coincidentally was his 13th MLB season as well.

If Stafford is able to lead the Rams to Super Bowl glory, Kershaw believes his career will be viewed in a more favorable light. “Yeah, 100%. No matter how well you do in your career, when you finally do what you want to do and win the whole thing, for me, there was a burden lifted. I just felt a sense of relief to finally get it done.

“Matthew is in a little different boat because he’s been good for so long. It’s just the Lions, he didn’t really have a support system around him. This is the first year where the team kind of matches up to his talent level. He’s obviously favored to win, so I’m excited for him. It will be really fun to watch.”

Dr. Dre Has Been 'Manifesting' Rams To Super Bowl LVI All Season

Jake Paul said he aims to create a fighters union

ALBA’s Eriksson out with back injury – News

CJ McCollum is working wonders for the New Orleans Pelicans

Honda give Verstappen’s engine the all-clear after crash · RaceFans