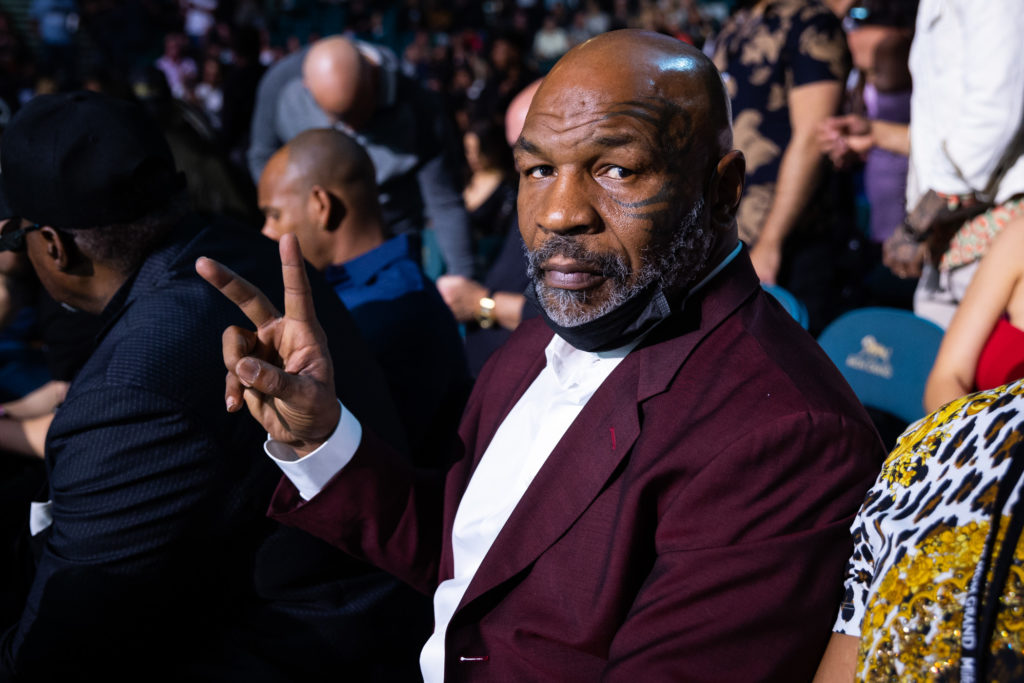 Friday night marked the 32nd anniversary of the greatest upset in Heavyweight boxing history (and maybe the sport’s history), as James “Buster” Douglas knocked out the seemingly invincible, unbeaten Mike Tyson in Tokyo, Japan. And we commemorated Douglas’ stunning win on our “Big Fight Weekend” podcast this week.

Antione Williams of “GOAT Boxing Promotions” joined the show to discuss just how the upset of Tyson happened and why it’s still so impactful three decades later. Hear us by clicking below:

Douglas entered the ring in the “Toyko Dome” baseball stadium as a 42-1 Underdog, but an hour later he was arguably the most famous sports figure in the world.

As we wrote previously,

In a performance that was every bit as impressive as it was shocking, Douglas dominated Tyson from the beginning of their scheduled 12-round Undisputed Heavyweight title fight. Never before had anyone in Tyson’s professional career stood up to and hurt Tyson the way that Douglas did.

With his size, longer reach, a steady left jab, plus, repeated straight right hands and right hooks to the head, Douglas continued to win round after round early. Thus, setting up the dramatics to come.

Douglas was tested when Tyson knocked him down in the 8th round of fight. And, even with his left eye almost closed shut “Iron Mike” was still dangerous with one punch knockout capability in the latter rounds.

However, Douglas remained composed and eventually landed a massive right uppercut of his own early in the 10th round. That staggered Tyson and eventually, another left hook connected on Tyson’s jaw and put him down for the first time in his professional career.

Tyson wobbled to his feet putting his mouth guard in backwards at the count of 9 and when referee Octavio Meyran looked into his eyes, he amazingly waved the fight off, as a technical knockout.

“Let’s go ahead and call it the biggest upset in the history of the sport…. Say it now gentlemen, James “Buster” Douglas, Undisputed Heavyweight Champion of the world.”

Lampley was right just over 30 years ago. No matter the upsets before or since, there was nothing quite like Douglas stunning Tyson in February of 1990.

Time marched on from that crazy night, but was not kind to Tyson. He went to prison in Indiana on a rape conviction with the guilty verdict being announced almost to the exact hour in February 1992 on the second anniversary of his loss to Douglas.

Tyson came out of the joint in 1995 and reclaimed the Undisputed Championship before Evander Holyfield upset him in November of 1996 and he was never champion again.

As for Douglas, his time in the limelight was fleeting and actually, it was also Holyfield who dispatched the out-of-shape Douglas with one punch in the third round in October of 1990. Thus, knocking Buster off the world title stage, once and for all.

Fight fans and observers in the 60s had their shocker of young unbeaten Cassius Clay beating the menacing Sonny Liston to take the title, and start his iconic reign as  Heavyweight champ through the rest of the 1960s and into the 70s.

And, those of us fortunate enough to be old enough to have watched and understood what Tyson did to the rest of the heavyweight division in the mid-late 1980s understand the magnitude of what Douglas did to him in Tokyo.

But, it doesn’t lessen the historical significance of February 11th. 1990 in Tokyo. A night, when Buster Douglas gave hope to all fighters for years and even generations to come, that anything is possible.

“SPENCE IS A MIDDLEWEIGHT” || FIGHTHYPE.COM

Oleksandr Usyk has war, not Anthony Joshua, on his mind

Fantasy implications for Dallas Goedert, Kyler Murray, and others