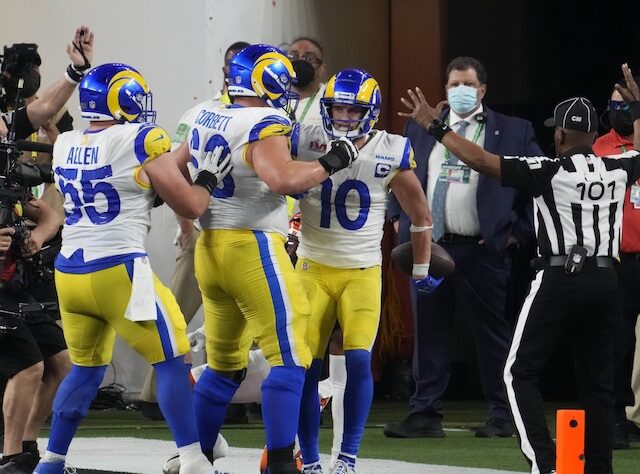 Three years after losing to the New England Patriots in the Super Bowl, the Los Angeles Rams returned to the big game, this time against the Cincinnati Bengals in their own SoFi Stadium.

While the future is still bright for this Rams organization, it’s no secret they went all in this season in hopes of winning Super Bowl LVI, and Sunday gave them a chance to accomplish their ultimate goal.

After losing the coin toss the Rams got the ball first and the teams exchanged non-scoring possessions to begin the game. The Rams offense then got going on their second drive, going 50 yards on six plays with Matthew Stafford finding Odell Beckham Jr. for a touchdown.

While Beckham was making his presence felt early, that unfortunately was short-lived as he suffered a non-contact knee injury in the second quarter and was ruled out for the game.

The scoring opened up in the second quarter as after the Bengals responded with a field goal late in the first, the Rams responded with another touchdown drive, this time with Stafford finding Cooper Kupp.

The Bengals immediately responded with their best drive though, capping it off with a trick play for the touchdown and the Rams eventually went into the halftime locker room leading 13-10.

Unfortunately, the start to the second half went as poorly as possible for L.A. as Tee Higgins scored a 75-yard touchdown on the first play after getting away with grabbing Jalen Ramsey’s facemask.

Both teams exchanged a few stops, and the Rams needed to just put one drive together late in the fourth to regain the lead. They finally were able to do that, going 79 yards on 15 plays with Stafford finding Kupp time and time again, including for his second touchdown with 1:27 to play to make it a 23-20 game.

The Bengals had one last chance, but the Rams defense came up huge yet again, with Aaron Donald making the final play on a pressure of Joe Burrow to force a turnover on downs.

To no surprise, Kupp was named the MVP of the game with eight catches for 92 yards and two touchdowns.

No more excuses for Simmons at legit title favourites Brooklyn

Masvidal Made The Sport As A Whole Look Bad