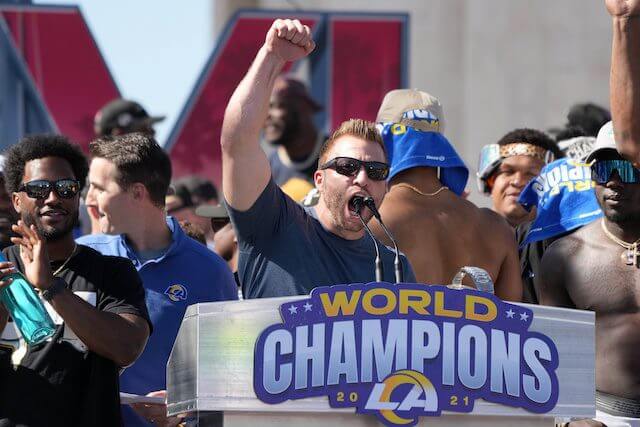 When the Los Angeles Rams defeated the Cincinnati Bengals in Super Bowl LVI, it marked the end of the road for several veterans on the roster. Eric Weddle confirmed he is going back into retirement after returning from a two-year hiatus, playing a key role in the defense and earning a ring for his efforts.

There has also been speculation that Aaron Donald and Andrew Whitworth could walk away from the game after adding a Super Bowl title to their respective Hall of Fame resumes. That may be more likely for Whitworth, who is 40 years old and wants to spend more time with his family.

Furthermore, some around the NFL believe Sean McVay could enter an early retirement after becoming the youngest head coach in NFL history to win a Super Bowl. The 36-year-old revealed after the Super Bowl that he is taking a wait-and-see approach on whether he will return next season and simply wants to live in the moment.

McVay’s fiancé, Veronika Khomyn, clarified in an Instagram story that her future husband has no plans of retiring at this time, via Jourdan Rodrigue of The Athletic:

In case it wasn’t already clear that there was much ado about nothing…here’s Veronika Khomyn (Sean McVay’s fiancé) with a message of clarity: pic.twitter.com/haU7sbgYcT

While Khomyn’s post gives hope to Rams fans who want McVay back for next season’s title defense, nothing is official until McVay gives a definite answer himself.

If McVay does in fact return, it wouldn’t come as a surprise as he egged on Donald to “run it back” during the team’s Super Bowl parade on Wednesday.

Since taking the helm as head coach in 2017, McVay has led the Rams to a 55-26 record and two Super Bowl appearances. He has two years remaining on his contract and will be in line for an extension if he decides to continue his coaching career.

Richarlison cites main cause of Everton regression; names man who would guarantee Europe

Samoa Joe Opens Up On Return To NXT, New Responsibilities