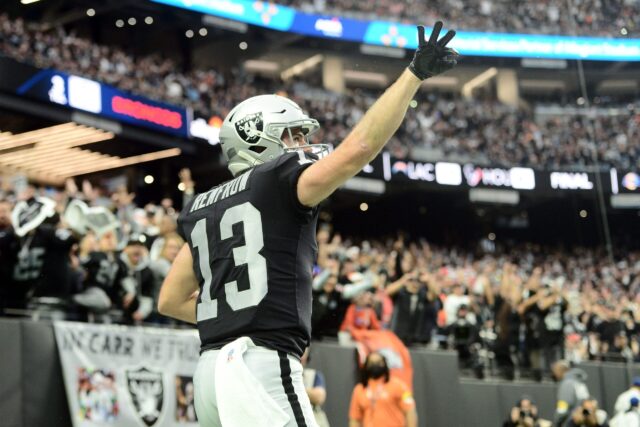 After taking a back seat to the other receiving options, Hunter Renfrow came on strong in the second half of the 2021 season and proved he belongs in the conversation for elite wideouts.

Renfrow turned in the best year of his career so far, recording 103 receptions, 1,038 yards, and nine touchdowns. With Darren Waller out with injury and Henry Ruggs’ unfortunate release from the team, Renfrow stepped up and often times carried the offense.

However, it was a rocky start for the receiver when he first joined the Silver and Black, and he detailed his lowest point during his rookie year in an appearance on the “Players Club Podcast” as transcribed by Raiders Beat:

“We played in London my rookie year, the fifth game of the year and then we had the bye week. I had won the starting job, but I really wasn’t playing well. I think I had like 6 or 7 targets and like one catch. At Clemson if you threw to me I wanted to catch the ball and I remember going back home that bye week and thinking ‘alright, this ain’t working, I’m going to have to do it my way.’ “Renfrow said this week on The Players Club Podcast.

“I know coach Gruden wants me to run it like this. I know they want me to run it like this, but I’m going to be out of the league in about a couple games if I keep doing it like that. I’m terrible,” Renfrow continued. “And so I didn’t want to look back in regret and say ‘oh, I was trying to please them so much and do it this certain way.’”

Suffice to say that whatever adjustments Renfrow made worked out as he finished his first year on a positive note and went to build upon his success the following season.

Now, Renfrow figures to be a more featured option under new head coach Josh McDaniels, and it will be interesting to see how the offense as a whole comes together.

Australia’s next F1 star Oscar Piastri: ‘I want to get there on merit, not buy a seat’ | Formula One

Teams on “same page” in terms of budget cap

Millman into quarterfinals at Washington | 6 August, 2021 | All News | News and Features | News and Events