The journalist has neither got in touch with me nor has he apologised: Wriddhiman Saha

Indian wicketkeeper-batter Wriddhiman Saha has revealed that the journalist who sent him threatening a message over not being given an interview has not got in touch with him. He also clarified that there has been no apology from the person in question.

Last week, after being dropped from the Indian Test team, Saha shared a screenshot on Twitter with intimidating messages from a scribe. He found plenty of support from former India cricketers, who urged him to name and shame the journalist. However, a few days, back the 37-year-old clarified that he would not name the person on humanity grounds

Now, in an interview to Zee News, the Bengal cricketer has clarified that he has not been approached by the said journalist since the controversy broke out. He said, “I am hurt with the message of the journalist. Neither have I ever behaved badly with any journalist nor have they misbehaved with me. But this was uncalled for. I wanted to expose him so that people know that the world of journalism has such people.” 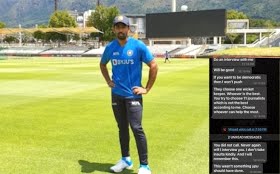 “I don’t want to reveal his identity because these are my morals and I live by principles. I always feel that I should give someone a second chance. This is the second chance that I want to give him for the time being,” Saha continued.

Having been dropped from the Indian team, Saha’s international career seems all but over. However, the domestic veteran asserted that he has no retirement plans. Instead, he said, “I am not considering retirement at the moment. I am going to play IPL and other matches in the domestic cricket. I am shocked and hurt for being dropped for the next two Test series against Sri Lanka. The way I played in the last match against New Zealand, I had expected that I will be in the team. But it seems that the selection committee had already made up their mind and decided to drop me.”

Speaking to the media after being dropped, Saha revealed that head coach Rahul Dravid had suggested him to consider retirement.

Meg Lanning to take a break from cricket

Shubman Gill Hits Back At Critics

Ireland finally pick up a win in their 11th game of the summer! They beat Afghanistan by 5 wickets with 1 ball to spare. : Cricket

Makabu-Mchunu Rematch on January 29, King Says Canelo Will Be Ringside