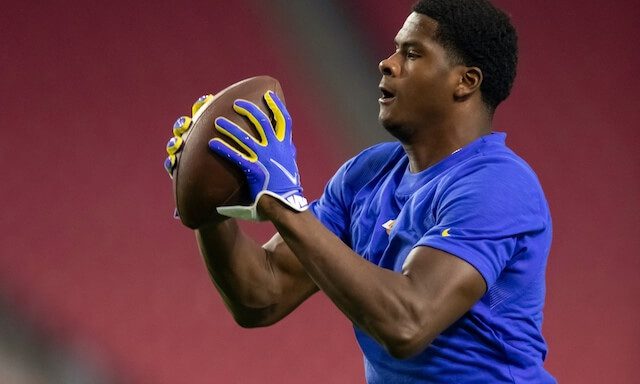 The Los Angeles Rams announced the signing of wide receiver Warren Jackson to a reserve/future contract. The 22-year-old was signed to the team’s practice squad this past November after being waived by the Minnesota Vikings in training camp.

At 6-foot-6 and 219 pounds, Jackson brings intriguing size to the Rams’ wide receiver room. By signing a futures deal, he will have an opportunity to compete for a roster spot during offseason workouts and training camp.

Jackson opted out of his senior season due to the coronavirus (COVID-19) pandemic and declared for the 2021 NFL Draft. The Mission Hills, Calif., native signed with the Denver Broncos after going undrafted, but was among the team’s early cuts in training camp.

Two of the biggest issues with Jackson’s game are his underwhelming speed and athleticism. His numbers at the 2021 NFL Combine included a disappointing 7.71-second three-cone and 4.72-second 40-yard dash.

Even with those subpar performances, Jackson represents an intriguing flier for the Rams. He instantly becomes the team’s tallest wide receiver, surpassing Ben Skowronek at 6-foot-3. Tight ends Kendall Blanton and Tyler Higbee are tied with Jackson as the team’s tallest pass-catching options.

3 young players to watch during the 2022 NBA Playoffs

Mike Winkeljohn Is A ‘Miserable B*stard