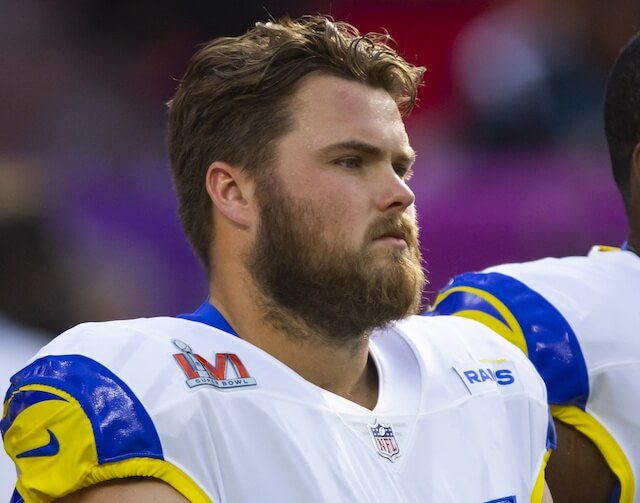 The Los Angeles Rams remained busy adding to their offensive line on the first day of the legal tampering period as they have re-signed interior offensive lineman ﻿Coleman Shelton﻿ to a two-year deal.

Shelton originally joined the Rams prior to the start of the 2019 season and he has since appeared in 43 regular-season games and six playoff games.

Shelton has made two career starts, including one in Week 14 last year, and he has also been a contributor on special teams, appearing in all 17 regular-season games during the 2021 season.

The 26-year-old first entered the league as an undrafted free agent with the San Francisco 49ers in 2018. He was cut by the 49ers at the end of training camp and signed with the Cardinals’ practice squad in October.

The Cardinals cut him at the end of training camp in 2019 and he was then signed to the Rams’ active roster.

The Super Bowl LVI champion is originally from Loyola, Calif., and played for the University of Washington, where he was a First-team All-Pac-12 lineman in 2017 and was named Second-team All-Pac-12 in 2016.

The Rams’ offensive line was among the best in football in 2021, so keeping as much of that group in tact as possible is a good idea.

The Rams only have one more guard spot to address with Noteboom and Allen returning, joining starters David Edwards and Rob Havenstein. Last year’s starter Austin Corbett is also a free agent and landed a more lucrative deal elsewhere with the Carolina Panthers after the Rams prioritized Noteboom and Allen.

Perhaps the biggest change for the Rams is at offensive coordinator as Kevin O’Connell left the organization for an opportunity to serve as the Minnesota Vikings’ new head coach.

O’Connell was a key figure on the offensive side, but head coach Sean McVay was able to quickly find his replacement in Liam Coen.

Coen and O’Connell actually spent a season working together in Los Angeles back in 2020 and O’Connell had nothing but praise for Coen.

Turkey – BSL Round 1 of Semi-Finals. Wins for Anadolu Efes and Fenerbahce

Tony Khan shares why he thinks fans boo Cody Rhodes, what it was like for Moxley to return