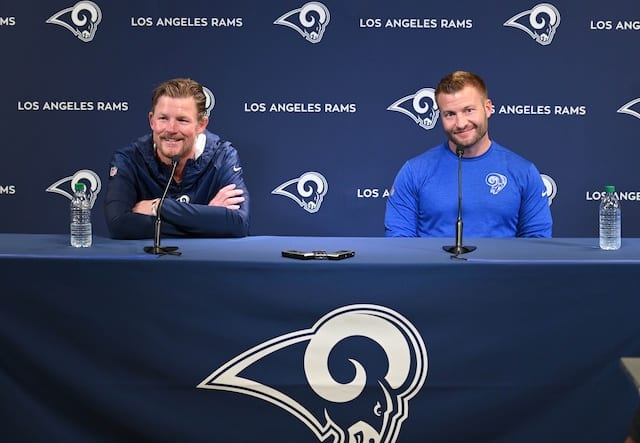 The Los Angeles Rams would not be where they are today without the work of head coach Sean McVay and general manager Les Snead. Since Snead hired McVay in 2017, the two have shared incredible success, including a championship in Super Bowl LVI.

McVay and Snead have come together on an aggressive team-building strategy, trading away nearly all of their top picks in exchange for Pro Bowl and All-Pro players. Jalen Ramsey and Matthew Stafford were each traded for two first-round picks, and yet it has not stopped L.A. from achieving the ultimate victory in the NFL.

So when it comes to the future of the Rams franchise, chief operating officer Kevin Demoff is hopeful that the two can sign long-term deals to stay in L.A., according to Gary Klein of The L.A. Times:

“They’re the architects of this run,” Demoff said.

“They have an amazing working relationship,” Demoff said. “You’d be foolish, when you look at how hard it is in this league to win, not to try to keep together a pair that’s done it really well.”

All offseason, rumors of McVay’s potential retirement had to be shut down by the Rams head coach. Instead, rumors of a contract extension took over, and all signs appear to be pointing in that direction. Hopefully by the beginning of the 2022 season, McVay and Snead are on deals that tie them to the Rams for years to come.

The Rams do not have a first-round pick until the 2024 draft, but if Snead’s attire at the team’s championship parade is any indication, it wouldn’t be surprising to see that selection made by a different team. A contract extension shows Demoff and owner Stan Kroenke’s support of Snead’s methods.

The Rams also have to work on a contract extension — or renegotiation — for superstar defensive tackle Aaron Donald. McVay has already confirmed that Donald is returning to the Rams in 2022, but the contract he’ll play on remains to be seen.

The Rams have shown that they are not afraid to spend money and draft picks to be atop the NFL standings. So when Von Miller left for the Buffalo Bills, the Rams immediately turned their attention to All-Pro free agent Bobby Wagner.

McVay confirmed the team’s interest in the former Seattle Seahawks star, but it remains to be seen if the two sides can agree on a dollar amount.

Sue Bird on Her Sneaker Game and Dressing for Herself

“We Don’t Have Much Longer on These Current Contracts”

Mir: At the start of the season, “we have to survive”

‘Too many competitive events is not healthy’