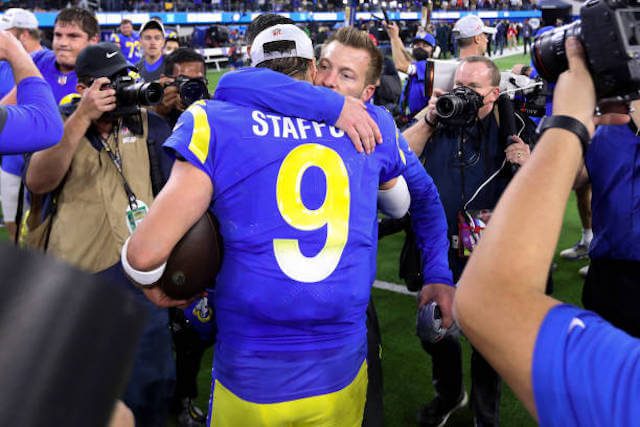 The Los Angeles Rams locked up their starting quarterback for the foreseeable future by giving Matthew Stafford a four-year extension worth up to $160 million. Amid retirement rumors surrounding Sean McVay and Aaron Donald, Stafford’s four-year extension made it difficult for either to truly consider walking away.

The Rams went all-in on Stafford last offseason, sending two first-round picks, a third-round pick and Jared Goff to the Detroit Lions for Stafford’s services. Almost immediately, Stafford made that gamble look like a steal, as he gave the Rams the dynamic offense they had been searching for since the 2018 season.

His chemistry with Cooper Kupp helped carry the Rams through the regular season and continued in the playoffs when he marched L.A. to a Super Bowl championship. It was their second appearance in the championship game since coming back to L.A., and their first win since the franchise was in St. Louis in 1999.

So for McVay, bringing Stafford back on a long-term extension represents a chance for sustained success, when many felt the Rams were all-in on 2021, according to Stu Jackson of TheRams.com:

“It’s a big deal,” McVay said of Stafford’s four-year extension. “I think anytime that you’re able to solidify the quarterback position for years to come, especially when you’ve got a guy like Matthew, that’s big, and you can really see that. I thought he did a great job working with our group. I that says a lot about him where he did a great job working in coordination with our group to do a deal that, hey, he deserves all the credit, but I think he also has a big picture understanding of, ‘Alright, how can we structure this in a way that allows us to be able to continue to surround him with good players,’ and really fortunate for that.”

There isn’t an abundance of quarterbacks in the NFL that can comfortably win a team a Super Bowl. So when the Rams got one of them in Stafford, it made all the sense in the world to extend him for what could be the remainder of his career.

If the Rams bring back Donald — as all signs are pointing towards — L.A. should have a serious chance to repeat as Super Bowl champions as they stare down an NFC that is significantly weaker than it was in 2021.

Because of how Stafford decided to structure his deal, the Rams have money left over to add more talent, and they already have done so by adding All-Pro linebacker Bobby Wagner, suring up the middle of their defense.

Latrell continues to be hung out to dry by South Sydney

What Are The Advantages Of Sports Betting?

REPORT: Kyrie Irving Playing in Brooklyn ‘With or Without Kevin Durant’

‘I hate fighting as well’

Siya Kolisi: ‘My sin was exposed – he told me I needed to stop drinking’ | South Africa rugby team