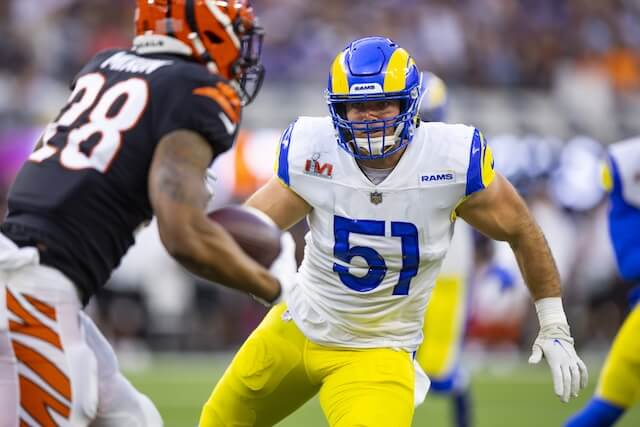 With new inside linebacker Bobby Wagner joining the Los Angeles Rams, the team appears set at the position heading into the 2022 season.

Linebacker has been an area of weakness for the Rams the past several seasons as they have opted to pour resources into other personnel groupings like wide receiver. However, when a player like Wagner became available, they knew they needed to shift strategies and go after a player that can legitimately move the needle on defense.

Los Angeles was able to scrape by at linebacker during the 2021 season, especially when rookie Ernest Jones came on strong toward the middle of the year. For the most part, the Rams stuck with Troy Reeder, who they did not end up tending as a restricted free agent in the offseason.

It was a sign that Reeder’s time with the Rams was coming to an end, but fortunately, it looks like he gets to stick in L.A. after signing a one-year contract with the Los Angeles Chargers, per Mike Kaye of Pro Football Network:

Former #Rams LB Troy Reeder is staying in LA and signing a 1-year deal with the #Chargers, per league source.

The Chargers are signing Reeder as a depth option, but it also makes sense for him because he gets to reunite with former Rams defensive coordinator Brandon Staley. Under Staley, Reeder appeared in 16 games, starting in seven of them.

Reeder had his moments for the Rams, but oftentimes struggled in pass coverage and tackling in the open field. The defensive unit was a whole still ranked among the NFL’s best, but there were certainly a handful of plays where Reeder is the culprit on a miscue or mistake. However, he ended up having a solid year overall, recording 91 tackles, two sacks and two interceptions.

“Picked him up, slammed him on his head”

Shaq Doubles Down on His Heated Criticism of Ben Simmons

“He let me know there’s another level”, “Horrible to play against, nasty” – Manchester United icon Rio Ferdinand names 4 toughest strikers he ever faced

[Thomas Maher] Red Bull Head of Aero Dan Fallows has joined Aston Martin as their Technical Director. He will be seeing out his 2021 contract before switching. : formula1