Katie Taylor: Amanda Serrano fight will be talked about for years and years to come


It’s a recurring theme in the career of Katie Taylor, the fact that at the Manchester Ring of Champions Society (ROCS) gym in Connecticut, the undisputed lightweight champion of the world doesn’t have a banner or designated parking spot like some of her peers. In fact, if you visit, like The Ring did back in 2018, you might not even know the best female fighter in the world conducted business there.

“It’s still the exact same gym since you were there,” laughed Taylor. “There’s still not a single photo of me inside that gym.”

And she’s fine with that.

“That’s the way I like it,” she confirms, a superstar of the sport who isn’t interested in all that comes with such a title.

“I don’t really buy into the hype about myself, or anybody else,” said Taylor. “I think I have a fantastic team of people around me; I have a fantastic family around me, and if I ever was getting a bit too big for my boots, those are people that will actually step in line to help me as well. So it is important to have those people around me. I live a very, very simple life. I’m just in the gym the whole time, I come back and relax, and my life is very unexciting in comparison to other people’s. But I definitely have great people around me, which helps.”

Suffice to say there’s no truth to the rumor that a petition will go up to get Taylor a banner in her home away from home should she win the biggest fight in the history of women’s boxing against Amanda Serrano this Saturday, and at least that’s one less thing to deal with on a fight week like none that the pride of County Wicklow has ever experienced.

“There’s definitely a different feel to this fight, for sure,” she said. “Even since the fight has been announced I can feel the excitement around it, and there’s a real megafight feel to it. And for me, personally, I don’t think I’ve been this excited for a fight ever before. It’s such a privilege to be part of the fight.” 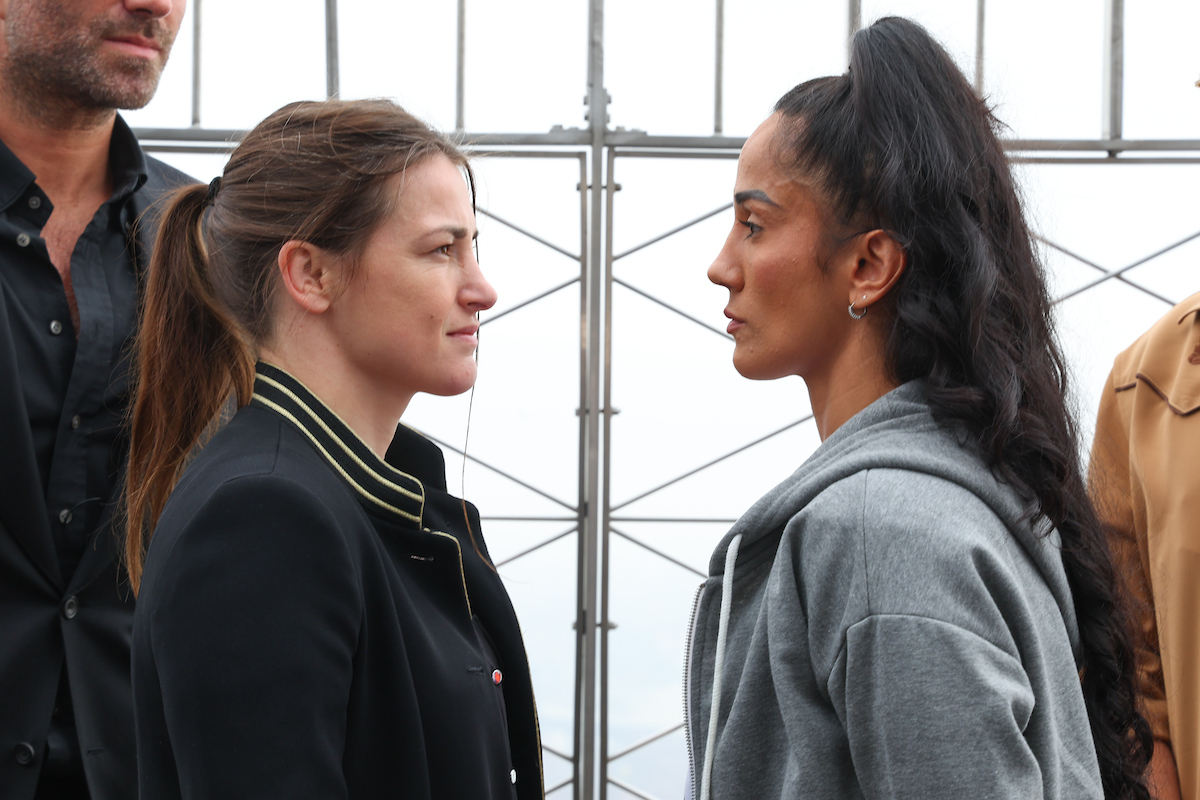 For those who have followed the now-intersecting careers of Taylor and seven-division champion Serrano, it will be a privilege to watch two of the sport’s best battle in the first female fight to headline Madison Square Garden (DAZN, 7:30pm ET), one that will also see them each pick up a seven-figure payday for their efforts. It’s been a long time coming, and while such superfights on the men’s side garner the same type of excitement, for the ones throwing the punches, it’s been a different road for the ladies. If Errol Spence Jr. and Terence Crawford eventually meet, they will be fighting for themselves and their respective teams and families. When Taylor and Serrano collide, they will also be fighting for the future of their sport, like they have been for years.

“There’s obviously a lot of pressure going into a fight of this magnitude because of all that and because of the weight of how important this fight is, not just for myself and Amanda personally, but for the whole sport of female boxing and for the next generation of fighters,” said Taylor. “But it’s also such a privilege to be in this position, as well, and this is the kind of legacy I wanted to leave the sport. Ever since the start, I wanted to be a history maker, I wanted to push back the boundaries, I wanted to make the way easier for the next generation of fighters, so I feel very, very privileged to be in this position, really.”

This is typical Katie Taylor. Works hard, shows up, does her thing and leaves a mark as the perfect ambassador for the sport with no complaints. She’s in with a like-minded foe in Brooklyn’s (by way of Puerto Rico) Serrano, which means that as big as this fight is, there has been no trash talk, no bad blood, no nonsense on social media. It’s a refreshing twist.

“There definitely is a mutual respect and I’m not gonna trash talk in any way, so I’m not gonna start attempting to trash talk now before the biggest fight of my career,” said Taylor. “It is very, very nice. It is the entertainment industry, but I like to do my entertaining inside the ring. The mutual respect is nice, but it is a bit of a crazy sport, where we’re going to be punching our heads in for 10 rounds and after the final bell rings, we’re gonna be hugging. But the respect is obviously there, and it’s one of the great things about boxing.”

Once the first bell goes, I’m gonna do whatever it takes.

Another great thing is seeing the switch in Taylor from soft-spoken and respectful to all fighter when the bell rings. In other words, for all the game planning the 35-year-old does with longtime coach Ross Enamait, once Taylor gets hit, she is intent on getting even.

“I don’t know,” she laughs when asked what the trigger is for her to go from Calm Katie to Terrible Taylor. “Obviously on fight week, the trigger goes off where I’m just dialed in. I’m probably a different person inside the ring than I am outside of it, but I am a very, very competitive person, and I want to make history in the sport, and I don’t like to lose fights and I want to do whatever it takes inside the ring to come out victorious. I think it’s just that competitive edge I have and once the first bell goes, I’m gonna do whatever it takes.”

It’s worked to the tune of 20 wins without a loss and the undisputed lightweight crown. But she’s not satisfied yet. There’s still the business of 10 rounds or less with a challenger expected to be her biggest test. It’s a matchup with a million questions around it, and that’s what makes good fights great. And often, in fights like this, it comes down to the intangibles, and maybe one of the biggest is whether Serrano can handle the intensity of a spotlight Taylor has grown up in.

“I haven’t really thought of that, to be honest, but I guess it does give me some sort of edge, and it’s great to have that experience of fighting in a big arena like that,” she said. “But she’s also a great champion, as well, and I’m sure she’s not thinking too much about that herself. But to have a chance to actually fight in the most iconic venue in boxing, Madison Square Garden, you’re thinking of the likes of Muhammad Ali and Joe Frazier, and these are fights they’re still talking about to this day. I think this fight on April the 30th will be the same. I think this fight will be talked about for years and years to come. It is gonna be a history-making fight in the sport of boxing.”

It already is. Now it’s up to Taylor and Serrano to make it special. They’re both up to that task.

Taylor-Serrano, plus undercard action, will be broadcast exclusively by DAZN.

Jose Nieves, bantamweight based in NJ, wants to be the next boxing star from Puerto Rico

The Second Act Of Teofimo Lopez

Looks like the refs did get it right : rugbyunion

Cyril Abiteboul gets his Ricciardo tattoo