Those who root for the success of women’s boxing must be thrilled.

The Katie Taylor-Amanda Serrano fight on Saturday was billed as the biggest fight featuring female boxers in history, which placed it in a bright spotlight. If it flopped, the women’s side of the sport would’ve taken a hit. If it succeeded, it would’ve taken a significant step forward.

To say it succeeded is an understatement.

First, fans evidently bought into the event with great enthusiasm. An announced crowd of 19,187 filled Madison Square Garden, where no women had ever fought in a main event.

And, second, the fight was a classic.

Taylor won by a split decision largely by sticking and moving, her strategy early and then late in the fight. However, it was the brutal middle rounds and the 10th and final stanza – when Taylor stood her ground – that fans won’t soon forget.

Serrano, who grew up in nearby Brooklyn, unloaded dozens of damaging blows that had Taylor on the brink of being knocked out in a hair-raising Round 5. The indomitable Irish icon not only survived but roared back to take control of the fight and win it going away.

Taylor won the last four rounds on two cards, the last three on the third, which allowed her to retain her undisputed lightweight championship and leave Serrano disappointed with the result.

However, if ever a fight produced no losers, this was it. Taylor (21-0, 6 KOs) became a bigger legend than ever. Women’s boxing might never be seen the same again. And even Serrano, who suffered her first loss in a decade, seemed elated by the moment.

“Women can sell, women can fight and we put on a hell of a show,” she yelled at the Garden.

The same thing occurred to me.

No, I’m not comparing Stevenson (18-0, 9 KOs) and Valdez (30-1, 23 KOs) to all-time greats Floyd Mayweather and Alvarez. I’m just saying that the Stevenson-Valdez fight had the feel of the 2013 Mayweather-Alvarez fight, which is a compliment to the new unified 130-pound champion.

Mayweather made a 23-year-old Alvarez look like he didn’t belong in the ring with the master. That’s what Stevenson did at the MGM Grand, delivering a master-class boxing clinic that made a previously unbeaten, elite opponent look like a journeyman.

His ability to land punches at a high rate (53% of his power shots on Saturday, according to CompuBox) and avoid those of his opponents while standing his ground most of the time is nothing short of breathtaking.

And remember: This was supposed to be a test for the gifted 24-year-old from Newark, New Jersey. If that was the case, what’s a better grade than A+?

Again, while Stevenson must now be on all pound-for-pound lists, it’s too early to anoint him the next coming of Mayweather. That kind of comparison must be made carefully given the Hall of Famer’s status as the best fighter of his generation.

At the same time, the fighter we saw on Saturday is the closest thing to Mayweather I’ve seen since the genuine article was in his prime, which should be exciting for those who appreciate truly sublime boxing skills.

Now we just sit back and see how much he can accomplish.

Serrano (42-2-1, 30 KOs) seemed to be on the verge of a historic knockout in Round 5, when she had Serrano within a punch or two of going down and perhaps not getting up. A stoppage of Taylor might’ve been the greatest moment in women’s boxing history.

Then the moment was gone.

Taylor, durable and determined, bounced back to hold her own in Round 6 and then pulled away on the cards to remain unbeaten and retain her consensus No. 1 position on pound-for-pound lists?

What happened to Serrano?

She was asked during the post-fight news conference about the fact she faded in the second half of the fight but didn’t really answer the question, other than to say, “I was good,” mean she felt strong. Her trainer said the same thing.

Something went wrong. Maybe she expended too much energy in Round 5, when she threw an astounding 114 punches (landing 44) in the two-minute frame. Maybe the fact Serrano is naturally smaller began to take a toll. Maybe it was Taylor, who moved more in the later rounds.

Maybe it was all of the above, which might explain why Serrano had difficulty explaining what happened to her down the stretch.

Serrano gave a remarkable performance, fighting the best in the business on even terms. Boxing Junkie had Taylor winning 95-94, six rounds to four (including a 10-8 round for Serrano in the fifth).

Unfortunately for her she had a chance to deliver a transcendent performance but let it slip away.

One day boxing fans will look back on the two-minute rounds in women’s boxing and shake their heads.

I don’t have to go over the list of endeavors in which women have and still are underestimated – sadly, it’s a long one – but I can say with conviction that our sport is on it.

Some of those in power believe women don’t have the physical capabilities to withstand three-minute rounds, a notion at which I scoff. That’s the same paternalistic garbage that kept women from running 10,000 meters and the marathon in the Olympics for generations.

Some will point to the Taylor-Serrano fight as an example of why two-minute rounds work. Females are forced to fight at a faster pace than their male counterparts because they don’t have time to dawdle.

I don’t buy that, either. The men, all of whom fight three-minute rounds, deliver entertaining battles on a regular basis.

Of course, the Taylor-Serrano fight was riveting as it was. That’s not the point. The fact is that women are perfectly capable of sharing in the three-minute-per-round tradition, which would allow them more time to show what they can do.

And there would be as specific advantage to adding one minute per round: Women would record more knockouts, which would enhance their personal profiles and be a boon to their side of the sport.

The same goes for 12-round championship bouts. The women can handle an extra six minutes of fighting in the most important fights.

The time for change is now. 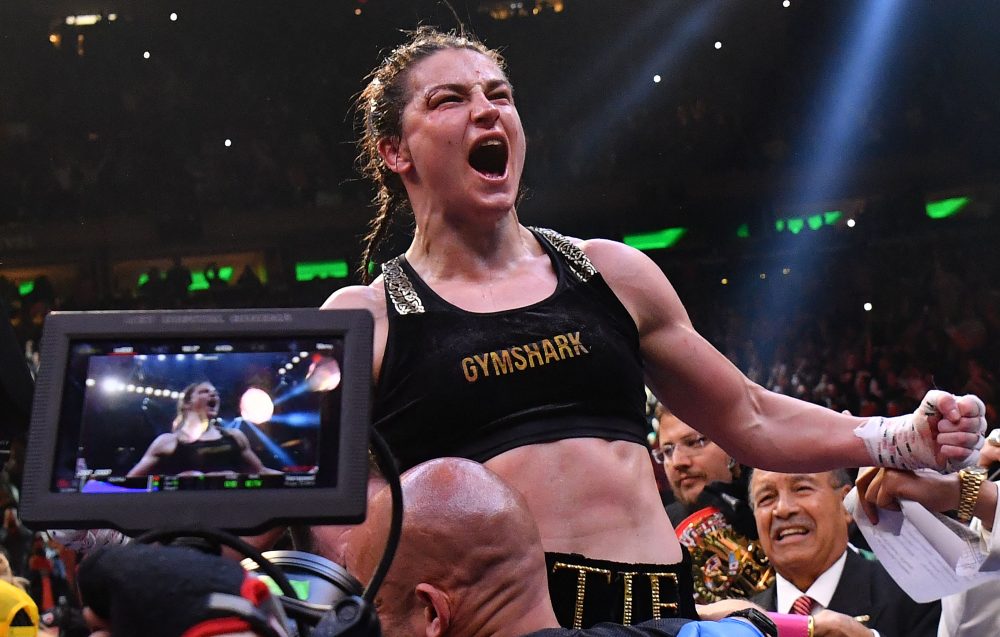 What has been your favourite Amir Khan moment?

Canelo vs. GGG III is official for Sept 17

Mikaela Mayer and Alycia Baumgardner agree to fight, no date or venue yet

‘Arrogance and excessive self-confidence can help…’