Vettel: Take DRS off and see how the racing really is 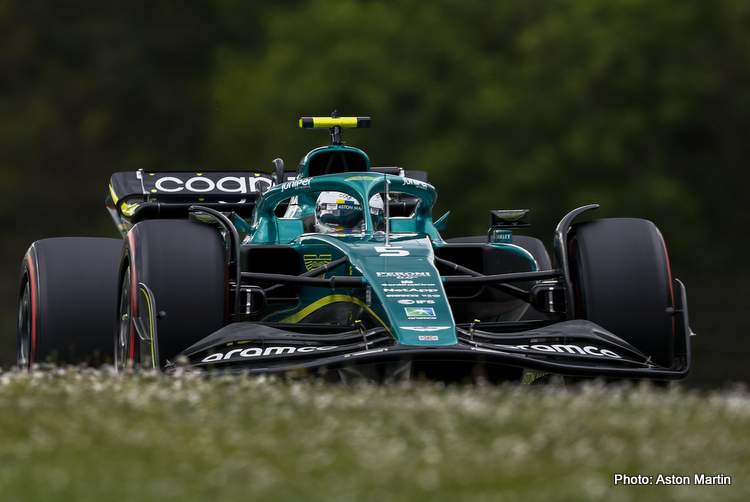 Sebastian Vettel called for an experiment to take Drag Reduction System (DRS) away, and then check if the new for 2022 Formula 1 regulations allow for better racing.

While the new rules are allowing the cars to follow closely without being affected by the wake (dirty air) of the car in front, the regulations have kept the DRS system as part of the new formula.

It seems that the system – that allows the driver to open a flap on the rear wing to reduce drag while being one second or less behind another car – is still needed to execute an overtake.

The quadruple World Champion was asked about the new aero regulations, with ground affect cars, introduced by F1 in 2022 in a bid to promote closer racing.

“I don’t have that much experience yet,” Vettel, who missed the first two races of the season for contacting Covid, said to the media at the weekend of the 2022 Emilia Romagna Grand Prix.

“But, you know, it’s very easy to judge straightaway. I think also testing, I think you can follow closer, there is less drag effect as well.

“We do rely on the DRS probably more than in the past, to some extent,” the German added. “The interesting bit would be to take the DRS off and see how the racing really is, if you are able to overtake a lot better than, let’s say, in the past.

The Aston Martin driver lamented that while DRS was introduced to assist overtaking, it seems to have become an indispensable tool to pass another car.

“I’m only a bit cautious for the DRS,” he revealed, “because it was brought in as an assistance to help overtaking but now it feels a bit like it’s the only thing that allows you to overtake at times.

“So ideally, we have set of regulation that allows us to follow and race without DRS. You know, DRS hasn’t been there for 70 years. It was brought in 10 years ago to help, as an experiment.

An overtake should be earned

“I think an overtake should always be an effort and not dictated by you being in the zone and you get the DRS,” Vettel explained.

He then referred to the racing tactics Max Verstappen and Charles Leclerc employed during the Saudi Arabian Grand Prix, to ensure they had the advantage of DRS on each other.

“The race in Jeddah, where you had the leaders braking for the DRS line to try and be the second one to cross that line, that’s a different type of racing,” the 34-year-old pointed out.

“So I don’t think we should go that way. So we will see. We’re still early in the project. Definitely you can follow closer.

“Overtaking is still hard, but it should be an effort and it should be a reward when you manage to overtake,” the 57-time polesitter reiterated.

The best golf gifts you can buy

NBA veterans are offseason targets for LeBron James and Lakers

Kyrie Irving on his future with Nets: “There’s no way I can leave my man [Kevin Durant] anywhere”