Nine months ago, Andy Murray won just eight games across three sets at Wimbledon against Denis Shapovalov in a match that showed the Scot had a ways to go in his comeback from hip surgery. Revenge tasted sweet for the former World No. 1 on Tuesday evening.

Murray defeated Shapovalov 6-1, 3-6, 6-2 to reach the third round at the Mutua Madrid Open. It is the first time he has won consecutive matches since January in Sydney, where the 46-time tour-level titlist reached the final.

After good wins at the Caja Magica against former Top 10 players in Dominic Thiem and Shapovalov, it will not get any easier for Murray. Next up is a blockbuster showdown with World No. 1 Novak Djokovic — their first meeting since the Doha final in 2017 — for a place in the quarter-finals.

“In theory I should have no chance in the match. He’s obviously No. 1 in the world [and] I’m playing with a metal hip, so I shouldn’t have a chance in the match,” Murray said in his post-match interview. “It’s a great opportunity for me to see where my game’s at and to play against him again.

“We’ve had so many great battles over the years in some of the biggest tournaments in the world. We played in the final I think of all four Grand Slams, we played here in the final, and I haven’t had that opportunity to play against him for a long time. Didn’t know if I ever would get that chance, so I’ll enjoy it, I’ll have a fantastic attitude in the match, give it my best and see where I’m at.”

Murray has shown glimpses of his best form throughout the season, winning eight consecutive first-round matches. But the 34-year-old has struggled to maintain that level. For a while Tuesday, it seemed that might be the case again.

The Scot showed great movement to put extra balls in play as Shapovalov wildly sprayed balls, making an abundance of unforced errors. At 2-2 in the second set, Murray had an opportunity to break for a commanding lead, but was unable to convert.

From there, Shapovalov began to find his range and the former World No. 1 did not have an answer, allowing the Canadian to surge through the second set. But the two-time Madrid champion did not go down without a fight.

Up 3-2 in the decider, Murray hit a sensational forehand passing shot that sent Shapovalov tumbling into the red dirt. And on the next point, the lefty cut the margins too fine on a forehand up the line, ceding the break. Murray took full advantage and with his fourth break of the match, he triumphed after two hours and nine minutes.

“I trained very hard the past four or five weeks and got my game in good shape. My movement has been so much better than where it was at the beginning of the year and it makes a huge difference to my whole game,” Murray said. “It allows me to make different decisions on the court. My movement won me that match tonight. I defended so many points. He has so much power and I managed to defend lots of points and that won the match for me, so I was really happy with that.” 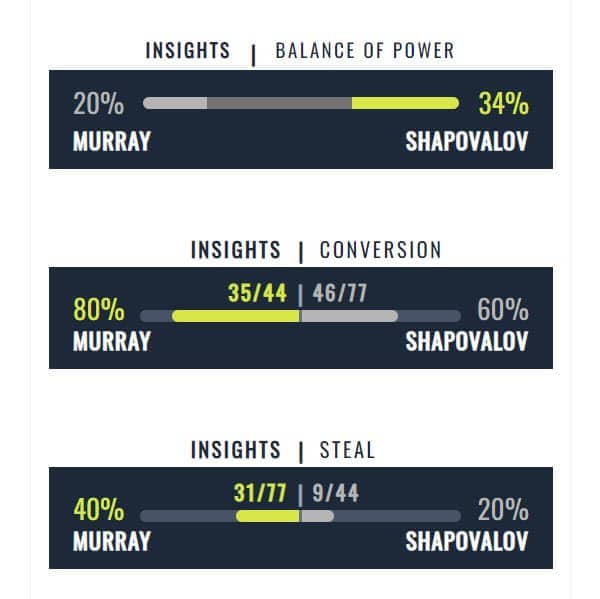 Speaking to Murray’s great defense was his ‘Steal score’, a new metric that reflects how often a player wins a point from a defensive position. Murray ‘stole’ 31 points while Shapovalov stole just nine. Murray’s outstanding defense also nullified the Canadian’s significant edge in the Balance of Power, which saw the left-hander in offensive positions 34 per cent of the match compared to 20 per cent for Murray. (Learn more about Balance of Power and Conversion & Steal scores.)

Next up will be his 37th ATP Head2Head meeting against Djokovic, who leads their rivalry 25-11. The pair’s seven most recent meetings have come in finals. Djokovic had plenty of positive things to say about Murray and his determination in returning from hip surgery.

“He’s moving well, playing better and better. It’s really fantastic to see, because he’s an important player for our game. He’s made his mark in the history of our sport by winning multiple Slams and gold medals and [reaching] No. 1 of the world. He’s one of the most important names that we have,” Djokovic said.

“To have him still compete is great, and to have him even play at [a] high level as the time goes by is impressive, considering the surgery and what he has been through in the past few years. His resilience and fighting spirit is really inspiring.”

Tennis News: Djokovic cruising at Wimbledon, but Alcaraz looking like he could present a challenge

WWE Makes An Important Change To Hell In A Cell

See all 18 holes of drone video at Whistling Straits