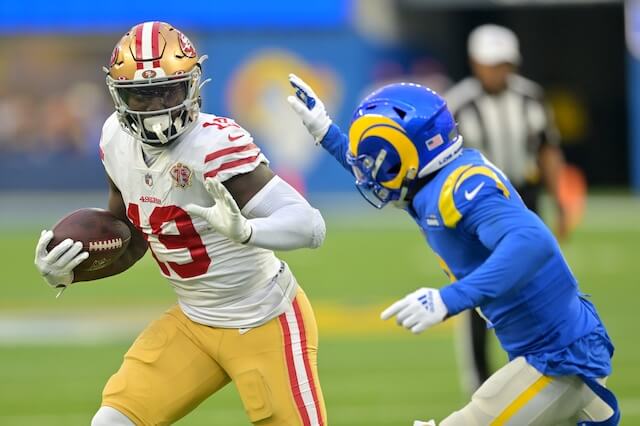 The 2022 NFL schedule release took place on Thursday night, so the Los Angeles Rams now know when they will be facing each opponent.

The Rams already knew which opponents they would be playing, but they now know the order so can begin preparing for their title defense.

For L.A., it will not be an easy season as they have the toughest schedule in the league as far as last season’s winning percentage goes. That doesn’t come as much of a surprise considering the NFC West is expected to be very strong again.

Additionally, the Rams will be playing a first-place schedule, which means games against the other NFC division winners in the Green Bay Packers, Dallas Cowboys and Tampa Bay Buccaneers. They are also playing the AFC West this season, which is perhaps the best division in football.

With the Rams playing so many quality opponents, that will make for some very intriguing games throughout the course of the season, both inside and outside the division. With that being said, I ranked the top seven games the Rams will play this season in terms of anticipation.

Where else to start other than Week 1 where as the defending Super Bowl champions, the Rams will open up the season at home on Thursday Night Football.

Part of what makes this so intriguing is that the Rams will likely be getting their Super Bowl rings and hanging their banner. And you know who else will be there to see it and get his? Von Miller!

The NFL decided to go with the Buffalo Bills as the Rams’ opponent, and even though it’s not a division or conference matchup, this is probably the game I’m looking forward to most all season.

The Rams and Bills are my picks to make the Super Bowl, so I think the season will be ending just how it’s starting.

This game should feature a matchup with two high-powered offenses to kick off the season, and it also serves as an opportunity for the Rams to get some revenge. The last time the Rams played the Bills in 2020, they fell down 28-3 before storming all the way back to take a 32-28 lead. The Bills got the last laughing by scoring a touchdown after the Rams were called for pass interference in the end zone on what was a questionable call.

Now, the Rams will be looking for revenge while also trying to start their title defense off on the right foot in front of a sold-out crowd at SoFi Stadium.

No. 2 on my list is, of course, the Rams’ first game against the rival San Francisco 49ers on the road on Monday Night Football in Week 4.

This game is a case of the 49ers looking to get revenge as despite beating the Rams in eight consecutive regular-season games, L.A. got the last laugh by beating them in the NFC Championship Game and going on to win the Super Bowl.

There will be a ton of question marks heading into this game, whether it be if Deebo Samuel will still be on the 49ers, or if their quarterback will be Trey Lance or Jimmy Garappolo.

Either way, there’s no doubt the 49ers will be looking to play physical football against the Rams, so they will have to be ready to stop the run. Having Bobby Wagner at middle linebacker this time around will certainly help L.A.’s chances.

Next up is a Week 12 trip to Kansas City to take on Patrick Mahomes and the Chiefs. This could potentially be another Super Bowl preview and is also a rematch of the famous Monday Night Football Game in 2019 in which the Rams won 54-51 in one of the most thrilling NFL regular-season games of all time.

The good news for the Rams is that they will not have to worry about stopping Tyreek Hill this time around. The Chiefs should be much-improved on the defensive side of the ball though and still have Mahomes, Travis Kelce and some other weapons to work with, so they should again be one of the better teams in the league in 2022.

This game will take place right after Thanksgiving, so there potentially could be some cold weather the Rams will have to deal with in Kansas City.

No. 4 on my list comes in Week 9 when the Rams will travel to take on Tom Brady and the Tampa Bay Buccaneers.

This is another rematch from 2021 and it is again a case of the Rams’ opponent looking for revenge. The Rams have had Brady’s number since he went to Tampa Bay, going 3-0 against him. They beat him handily in the regular season in 2021 and then traveled to face them again in the NFC Divisional Round.

That was a roller coaster of a game as L.A. went up 27-3 in the first half before turning the ball over four times, allowing the Buccaneers to tie it late. Matthew Stafford and Cooper Kupp then put together a miracle game-winning drive though to win it with a field goal as time expired.

That game not only ended Brady’s season, but it momentarily ended his career as he decided to retire shortly after. That retirement was short-lived, however, as he will be back with the Buccaneers looking to dethrone the Rams in 2022.

Next is another tough matchup against an NFC contender on the road when the Rams travel to take on Aaron Rodgers and the Green Bay Packers on Monday Night Football in Week 15.

The Rams may have gotten a little lucky last postseason as they did not have to travel to Green Bay after they were upset by the 49ers. Rodgers has had the Rams’ number in recent years, so this should be a tough test down the stretch of the 2022 season for L.A.

The good news though is that Rodgers is without his top target in Davante Adams after he was traded to the Las Vegas Raiders. Adams and Jalen Ramsey have had some must-watch matchups over the years.

Similar to the Kansas City game, this will likely be played in the cold weather so the Rams will have to be ready on Monday night in Week 15.

We close out this list with two more AFC West opponents, first with the Rams hosting the Denver Broncos on Christmas Day.

The NFL doesn’t usually do games on Christmas Day so this matchup will already be highly anticipated because of that. It became an even better matchup when the Broncos decided to trade for Russell Wilson, putting them back into championship contention.

The Rams thought that they would be able to get away from Wilson with him leaving the NFC West, but that is not the case with these two teams squaring off.

Aaron Donald and the Rams defense have typically done a good job of getting pressure on Wilson while he was with the Seattle Seahawks though, so they will try to do the same thing to earn a victory in this one.

We finally close out our list with the “Battle For L.A.” with the Rams taking on the Los Angeles Chargers in Week 17.

These are two teams that will be very familiar with each other considering the Chargers’ head coach is former Rams defensive coordinator Brandon Staley.

The Chargers seem primed to take a big step forward this season as they return their whole offense led by Justin Herbert while also adding some star power on the defensive side of the ball in Khalil Mack and J.C. Jackson. Not to mention they also signed former Rams defensive lineman Sebastian Joseph-Day, so those additions coupled with Staley’s scheme should lead to big improvements on that side of the ball.

The insane impact of Jaren Jackson Jr. on the Memphis Grizzlies

FIA to clamp down on flexing rear wings

Verstappen: Red Bull reliability still 'too much of a hit and miss'